Battle lines drawn for a civil war in Yemen 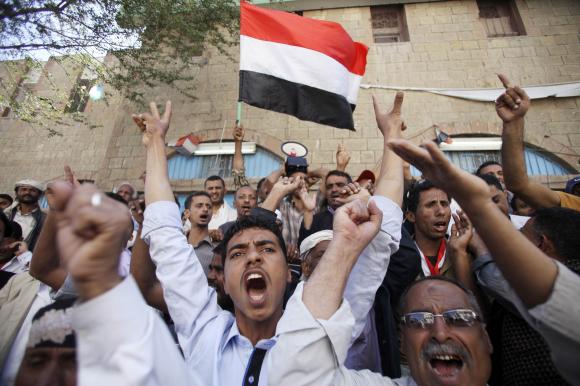 They have pitched camps on the edge of the country’s oil-rich Marib province, determined not to let their home turf fall as a prize to the Shi’ite militia that now rules much of Yemen.

Having almost miraculously avoided civil war for four years after being rocked by Arab Spring protests, the impoverished Arabian Peninsula country awash with weapons now appears to be leaning toward the kind of conflict that has ravaged other countries in the region.

A fight for land and power has spread since the Houthi rebels overran the capital Sanaa in September, taking on a sectarian stripe that may embroil regional powers Iran and Saudi Arabia and strengthen Yemen’s powerful al Qaeda branch.

(For a graphic showing extent of Houthi control, click on link.reuters.com/fec24w)

“Traditional Yemeni political actors used to find middle ground and didn’t let their clashes lead to a full-blown civil war. The Houthis don’t seem to be interested in compromising,” said Nadwa Dawsari, an expert and researcher on Yemeni tribes.

“They mix a lack of experience in politics with, as their own leader has said, limitless ambitions. The fact that Iran is involved aggravates things and brings in a regional dimension that makes a conflict harder to avoid,” she told Reuters.

A decade of on-off government offensives against the Houthis devastated their homeland in Yemen’s impoverished north, flattening villages and pulverizing Saada city – the ancient centre of Yemen’s Shi’ite sect which ruled the country for a thousand years until a republic was founded in 1962.

But after street protests ousted veteran president Ali Abdullah Saleh in 2011, national dialogue talks on Yemen’s future foundered and the divided military could no longer hold off the aggrieved militants’ advance.

The rump state Houthi fighters have carved out in Yemen’s north and west needs resources in order to be viable.

Clad in the traditional Yemeni dagger belt during a televised speech last week, the group’s leader Abdel-Malek al-Houthi upbraided leaders of areas not yet under their control and warned them against “playing the devil’s game.”

“If people try to play games which affect the economy, the people will resist them. The revolution, the people, the army and the security forces will stand against them,” he said.

Bereft of much of the state’s revenue since Saudi Arabia pulled its aid late last year, the Houthi-run government likely won’t be able to pay public sector salaries or keep the moribund economy afloat without the oil and electricity overwhelmingly concentrated in the hands of Sunni tribal enemies in Marib.

Not without a fight, leaders there say. Their arsenal of anti-aircraft missiles, Grad and Katyusha rockets will not be their only defence.

“We’ll blow up the oil and gas wells if the Houthis use planes after the air force fell into their control, and we’ll cut off the road to the capital,” said Sheikh Hamad Ben Wuhayt, who leads a group of tribal fighters on Marib’s western edge.

Tribal leaders say Saudi Arabia has kept up a longstanding policy of paying regular cash allowances to local leaders despite its boycott of the government, but has not given them weapons.

Analysts and diplomats have long said the Houthis receive arms and training from Shi’iteIran, which has praised the Houthi takeover as a revolution while Sunni gulf leaders condemn it as a coup.

A shooting war has been underway for months, with dozens of fighters killed each week in clashes pitting the Houthis against Sunni tribesmen and al Qaeda fighters in the southerly al-Bayda province.

The province offers a strategic gateway both to Marib and Yemen’s formerly independent South, which has eluded Houthi control along with its ports and gas reserves.

Al Qaeda in the Arabian Peninsula, the most powerful branch of the global militant group, has seen its space to thrive widen as the state’s remit across the country has collapsed.

The militants have relished joining the tribal fight and driving suicide car bombs into the Shi’ite “apostates” – not just in the mountainous wastes of the battlefield but repeatedly in the capital, helping to sow poisonous sectarian resentment.

“We wish Saudi Arabia would intervene militarily, so we can rid the Islamic world of it and all its little Islamic Staters,” Houthi official Zaid al-Houthi wrote on his Twitter page this week, referring to the ultra-radical Sunni militant group.

But the embrace some tribes have given to al Qaeda may continue to convince Saudi Arabiato hold off providing them weapons, a senior Yemeni official told Reuters.

“A civil war would affect the security of the kingdom and the region. Others will join this war and be fighting in what is effectively Saudi Arabia’s backyard,” the official said.