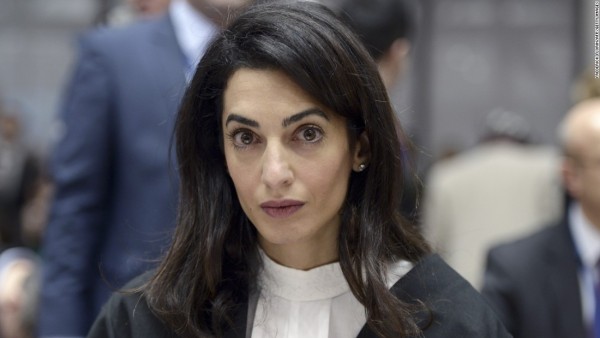 International human rights lawyer Amal Clooney will travel to Cairo in hopes of freeing jailed journalist Mohamed Fahmy, the journalist said in a statement released by his family Sunday.

Fahmy, who is a dual Canadian-Egyptian citizen, has been granted a retrial, he said in the statement.

“The trial date on February 12 represents our worst nightmare, to have to go through another circus of a retrial,” he said.

Fahmy was one of three Al Jazeera journalists who were arrested in Cairo in December 2013. Producer Baher Mohamed also remains behind bars.

But one of Greste’s lawyers suggested days ago there could be more legal issues ahead for Greste.

“According to Egyptian law, this is considered an extradition,” Amr Eldib said. “Peter must be tried in Australia and authorities there must determine if he is guilty or not.”

On February 2, Clooney gave CNN a statement regarding Fahmy.

“I have been in touch with the Fahmy family and we are all delighted that Peter Greste has been released,” it said. “As Mr. Fahmy’s counsel we are doing all we can to ensure the same outcome for Mr. Fahmy, who has suffered the same injustice.”

An Egyptian government official had said that Fahmy, a dual Egyptian-Canadian citizen, would be freed soon after his Australian colleague Peter Greste was deported on 1 February, provided that he renounce his Egyptian citizenship.

“Since Mr Greste’s release, Mr Fahmy’s Egyptian counsel has been informed by Egyptian government officials that his release was to follow, and that it was imminent,” Clooney wrote in the letter addressed to President Abdel Fattah al-Sisi and his foreign minister.

“This was to be expected, given that Mr Fahmy has been the victim of the same injustice as Mr Greste,” wrote the Britain-based lawyer of Lebanese origin, who has represented WikiLeaks founder Julian Assange and taken on other high profile cases.

“Since this has not yet occurred, however, I now write to request a meeting with you, or your designated officials, as soon as possible to discuss the status of the case” she wrote.

Fahmy and Greste, along with Egyptian producer Baher Mohamed, were arrested and sentenced to up to 10 years in prison after being convicted of aiding the blacklisted Muslim Brotherhood in their coverage, a charge rights groups called absurd.

The court sentenced them to up to 10 years in prison. An appeals court overturned the verdict and ordered a retrial, while under international pressure Sisi last year passed a decree allowing incarcerated foreign nationals to be deported to their home countries.