TransAsia plane with 58 people on board crashes in Taiwan 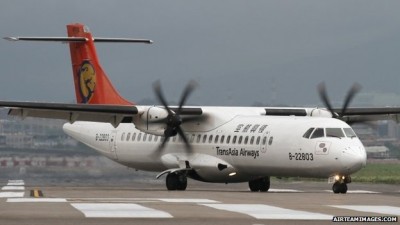 A TransAsia Airways Corp. plane carrying 58 people, including five crew members, crashed in a river in Taiwan’s capital Wednesday morning, according to the Taipei Fire Department.

The number of casualties isn’t yet known. TransAsia couldn’t be reached for comment.

The ATR-72 turboprop took off from Taipei’s Songshan Airport at 10:45 a.m. local time and crashed en route to the outlying island of Kinmen, according to local TV. Television footage showed wreckage of a plane floating in the Keelung River in Taipei.

An official from the fire department said at least 13 people have been rescued so far and first responders are continuing the rescue efforts.

Witnesses told the fire department that they saw two bodies falling from the sky around the time of the crash. They also said pieces of plane debris hit a taxi on the ground. The driver was taken to the hospital.

This is the second TransAsia plane crash in seven months. In July, Flight 222 heading from Taipei to Penghu, another outlying island, crashed a few minutes before landing, killing 48 people. TransAsia is the Taiwan’s third-largest carrier by fleet size.

Nine members of the Safety Aviation Council have been dispatched to the scene of the crash.