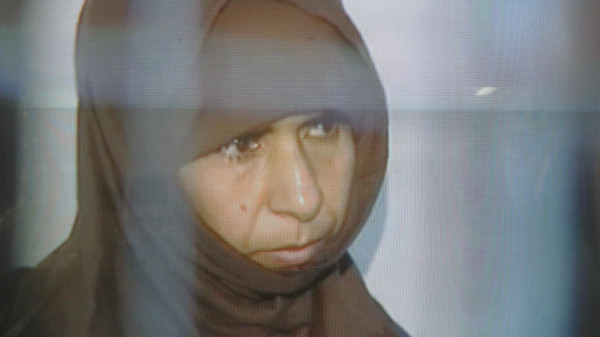 Sajida al-Rishawi, the Iraqi woman militant, was sentenced to death for her role in a 2005 suicide bomb attack that killed 60 people. Ziyad Karboli, an Iraqi al-Qaeda operative, who was convicted in 2008 for killing a Jordanian, was also executed at dawn.
Share:
Jordan responded rapidly to the gruesome murder of a Jordanian pilot at the hands of the Islamic State, executing Sajida al-Rishawi, a convicted suicide bomber, and Ziad al-Karbouli, a top lieutenant of Al Qaeda in Iraq, before dawn on Wednesday, according to the official news agency Petra.

When relatives learned Tuesday night that the Islamic State had released a video showing the death of a Jordanian fighter pilot, First Lt. Moaz al-Kasasbeh, they tried to keep it from his mother, Issaf, and his wife, Anwar. They switched off the television and tried to wrest a smartphone from his wife’s hand, but she had already seen a mobile news bulletin.

Married only six months, Anwar ran crying into the street, calling her husband’s name and saying, “Please God, let it not be true.” Issaf fell to the floor screaming, pulled her head scarf off and started tearing at her hair.

That was before they knew how he had been killed. No one dared let them know right away that Lieutenant Kasasbeh’s tormentors had apparently burned him alive inside a cage, a killing that was soon described as the most brutal in the group’s bloody history.

Both prisoners had already been sentenced to death for terrorism offenses. Mr. Karbouli was accused as one of the planners of the 2005 hotel bombings in Amman that killed more than 57 people; Ms. Rishawi was the only one of four suicide bombers in that attack whose explosive vest failed to detonate. On Tuesday, Anwar Kasasbeh had been laughing at the memory of her husband’s delight when he discovered that her family kept rabbits in their home. After they married, her parents gave them the rabbits.

“It was so funny, he was so happy about those rabbits,” Anwar told a visiting reporter about her 26-year-old husband. “He told me how he always wanted rabbits.”

The video, with its references to the Islamic State’s punishment of nations like Jordan that joined the American-led coalition against it, appeared to be an attempt to cow the Arab states and others that have agreed to battle the militants in Syria. It appeared to have had the opposite effect in Jordan, which suggested its resolve had been stiffened. But the capture of the pilot had already hurt the coalition, with the United Arab Emirates suspending its own airstrikes in December and demanding the group improve its search and rescue efforts for captured members.

The release of the video came after weeks of growing anxiety in Jordan, as the country’s leaders tried to win the release of Lieutenant Kasasbeh, a member of an important tribe and the first fighter for the coalition bombing the Islamic State to be captured. Their attempts became more complicated late last month when the Islamic State, also called ISIS or ISIL, suddenly entangled the pilot’s fate with that of a Japanese man it held hostage, demanding that Jordan release Ms. Rishawi from death row in exchange for him.

The extremists gave Jordan a deadline of last Thursday to set the prisoner free, saying Lieutenant Kasasbeh would be killed otherwise. Jordanian officials expressed willingness to bargain — a major concession to the militants — but refused to release Ms. Rishawi until they received proof that the pilot was alive.

Continue reading the main story
On Tuesday, Jordanian officials said they learned the pilot had actually been killed Jan. 3, suggesting that their caution was justifiable. They did not, however, explain where they got the information.

Even by Islamic State standards, the latest propaganda video was particularly gruesome. The footage alternates images of the pilot while he was alive with segments showing the rubble of buildings and the burned bodies of Syrians allegedly killed in coalition airstrikes. Islamic State members took to Twitter to applaud the pilot’s death, calling it an eye for an eye.

At the end of the 22-minute video, an Islamic State fighter sets a powder fuse alight as Lieutenant Kasasbeh watches, his clothes drenched in fuel. The flames race into the cage and engulf him. The camera lingers, showing close-ups of his agony, before concluding with pictures of what the Islamic State claimed were other Jordanian pilots and an offer of 100 gold coins for whoever kills one of them. (American officials said they were trying to authenticate the video.)

Jordan’s military on Tuesday vowed to avenge the pilot’s death, and Jordan’s King Abdullah II planned to cut short a trip to Washington, returning by Wednesday, according to Jordanian media.

“The blood of our hero martyr, Moaz Kasasbeh, will not go for nothing,” said Mamdouh al Ameri, a spokesman for the Jordanian military. “And the revenge will be equal to what happened to Jordan.” The spokesman did not specify the meaning of that threat.

Jordan and the U.A.E. are among several Arab countries taking part in American-led air raids against Islamic State positions in Syria. Two other Arab states, plus Iraq, are members of the coalition in other capacities.

Lieutenant Kasasbeh was allegedly shot down in his F-16 fighter bomber on Dec. 24 during an air operation against Islamic State positions not far from the militants’ stronghold of Raqqa in northern Syria.

He cut a dashing figure in uniform, with green eyes, black hair, and a slim build, and he had a significant social media following.

His capture transfixed the nation, which suddenly saw photos of the lieutenant being dragged by militants out of a swamp where he apparently crashed.

Weeks before the deadly attack on the satirical newspaper Charlie Hebdo in France prompted refrains of “Je Suis Charlie,” Jordan’s Queen Rania started a campaign on Instagram, the popular photo-sharing service, called “We Are All Moaz.”

Lieutenant Kasasbeh’s captivity at first aroused anti-coalition sentiment among many in Jordan, but public opinion shifted dramatically as the Islamic State issued videos showing what it said were the beheadings of two Japanese hostages, including the one the militants had wanted to trade. By last week, critics of the coalition and the government had come under fire for trying to turn the pilot’s plight to political advantage.

Although he joined the elite of Jordan’s air force — its 60 or more F-16s are its most important aircraft — Lieutenant Kasasbeh did not show early interest in the military or in flying, his family said.

Continue reading the main story
“It was just by happenstance,” his father, Safi Youssef al-Kasasbeh, said Sunday. During his last year in high school, Moaz, the fourth of eight children and the third son, was planning to go to medical school in Russia, as his mother had long encouraged. But he saw a notice in a Jordanian newspaper seeking candidates for the air force, and, on a lark, Lieutenant Kasasbeh applied.

To everyone’s surprise, he was chosen over hundreds of other applicants and went straight to flight school instead of college. He graduated and was commissioned as an air force officer in 2009.

His eldest brother, Jawad Safi al-Kasasbeh, an engineer seven years older than Moaz, took his captivity particularly hard. Twice Jawad had saved his younger brother’s life when he was a small child: once when Moaz accidentally started a fire, and another time when he nearly stuck a nail in an electric socket.

“Now when he really needs me, I can’t do anything,” Jawad said. “I was the one who was supposed to support him, to be there for him.”

Jawad helped introduce him to his future wife, Anwar, the sister of Jawad’s best friend. The couple moved into an apartment of their own, in the family’s hometown, Al Karak, so Moaz could be close to his parents, instead of near the air base a couple hours’ drive away. Moaz often visited his parents on days off, and the last time Jawad saw him, five days before he was captured, he was taking his father’s car to Amman for repair.

Far from the speed-addict image of the fighter pilot, his family said, Moaz was austere in his personal habits. His car was a nine-year-old Mitsubishi Lancer, and he rarely wore jeans, preferring suits when he was not in uniform.

His family all agreed that Lieutenant Kasasbeh had always been the favored son, the one closest to the parents among the eight siblings. He usually got his own way with his father, but not always.

Like Anwar, Jawad recalled how much his brother had wanted a pet rabbit and how he badgered their father, who said they had no place to put it. So Moaz built an enclosure in the yard and asked again. When his father said they had no food for the animal, Moaz gathered rabbit food and stocked the enclosure. Still no. So he got his baby sister and put her there, saying, “See, she’s my rabbit now.”

Tears came to Jawad’s eyes as he recalled that story. Before she learned of her husband’s death, Anwar worried that he would be upset if he returned home to learn that, distracted by concern over his plight, no one had taken care of the rabbits and they had escaped.