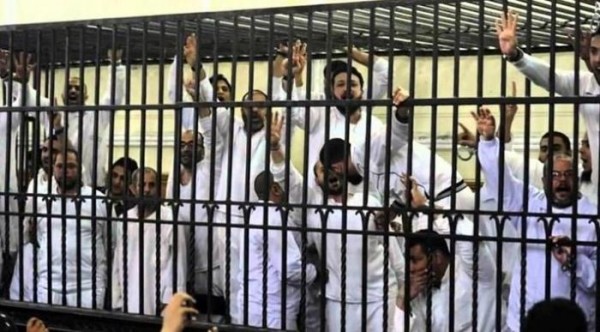 An Egyptian court sentenced 183 supporters of the outlawed Muslim Brotherhood to death on Monday on charges of killing police officers, part of a sustained crackdown by authorities on Islamists.

The men were convicted of playing a role in the killings of 16 policemen in the town of Kardasa in August, 2013 during the upheaval that followed the army’s ouster of Islamist president Mohamed Mursi. Thirty-four were sentenced in absentia.

Egypt has mounted one of the biggest crackdowns in its modern history on the Brotherhood since the political demise of Mursi, the country’s first democratically-elected president.

Thousands of Brotherhood supporters have been arrested and put on mass trials in a campaign which human rights groups say shows the government is systematically repressing opponents.

“These verdicts and sentences must be quashed and all of those convicted should be given a trial that meets international standards of fairness and excludes the death penalty.”

Monday’s sentences came a day after Al Jazeera journalist Peter Greste was freed after serving 400 days in Egyptian jail on charges that included aiding a terrorist group – a reference to the Brotherhood. Two of his Al Jazeera colleagues are still detained.

The movement says it is committed to peaceful activism
.

The death sentences followed one of the bloodiest attacks on Egyptian security forces in years. Islamic State’s Egypt wing claimed responsibility for a series of coordinated operations that killed at least 27 people last week.

Sisi blamed the Brotherhood for the violence and told Egyptians in a televised address that the war against militancy will be a long and tough.

Egyptian authorities make no distinction between the Brotherhood, Islamic State and al Qaeda, arguing that they have a shared ideology and are equally dangerous.

Security forces killed hundreds of Brotherhood supporters and arrested thousands of others after Mursi’s ouster.

After the death sentences were read out on Monday, Brotherhood supporters held in metal cages shouted profanities at policemen. A defense lawyer looked at the Islamists and said “You have God.”

The Egyptian government’s human rights record has come under closer scrutiny since woman activist Shaimaa Sabbagh was shot dead during a Cairo protest on January 24, a day before the anniversary of the 2011 uprising that toppled Hosni Mubarak.

The Interior Ministry promised an investigation.

Separately, an Egyptian police officer has been detained on suspicion of killing a suspected member of the Brotherhood in hospital, the Interior Ministry has said.

The suspect was being treated in custody for wounds suffered while he was allegedly planting explosives. The ministry said that the man had provoked the policeman by insulting him. “Then the policeman lost control of his feelings,” it said.