Stakes are huge as Hezbollah, Israel edge closer to a war 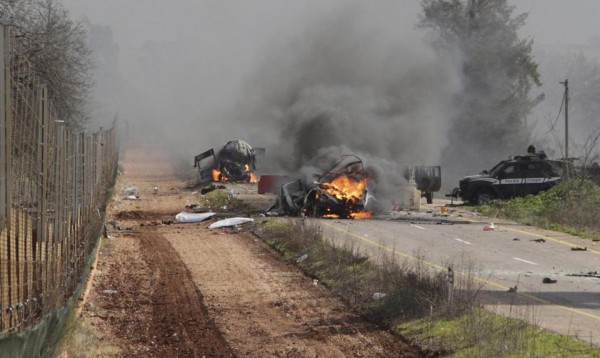 Burning vehicles were seen near the occupied village of Ghajar on Israel’s border with Lebanon on Wednesday January 28, 2015
Share:

The attack was widely anticipated as a retaliation for Israel’s killing of six Hezbollah members, two of them senior commanders, and an Iranian general in a drone strike 10 days ago near Quneitra in Syria’s Golan Heights.

Hezbollah claimed the attack in a statement and dedicated it to the “martyrs of Quneitra,” a reference to the Hezbollah personnel and the Iranian general killed in the Golan Heights.

The attack occurred shortly before midday on Lebanon’s southeast border between the village of Ghajar and the foot of the Shebaa Farms, a 25-square mile mountainside claimed by Lebanon but occupied by Israel since 1967. (The United Nations maintains that the Shebaa Farms is Syrian territory.)

It began when a Hezbollah unit fired anti-tank missiles at a convoy of Israeli army vehicles, destroying at least two. Security sources in south Lebanon said that a total of six missiles were fired from a distance of around three miles north of the Israeli convoy. Seven soldiers were also wounded, according to the Israeli army.

Israel responded by firing more than 130 artillery shells at areas in Lebanon facing the Shebaa Farms, which prompted many residents in south Lebanon to flee to safer areas , north of the borders.

As news spread in Lebanon of Hezbollah’s retaliation for Israel’s Jan. 18 airstrike, many Lebanese leaders criticized Hezbollah’s action and warned of a new war.

Michel Suleiman, the former president of Lebanon, asked on his Facebook page “where is the interest of Lebanon if it gets sucked into a war with Israel, which is the one that wants war.” Hezbollah, he said, was serving the interests of Israel by prompting a response when it attacks the country.

Samir Geagea , the head of the Lebanese Forces, a Christian political party said Hezbollah is the sole party responsible for any possible Israeli response, adding: “Today’s development indicates that Hezbollah is further and further expanding its regional schemes against the Lebanese state.”

The LF leader said Hezbollah was to blame if Lebanon is drawn into a war with Israel.

“Hezbollah has no right to implicate the Lebanese people in a battle with Israel. There is a government and a Parliament which can decide on that,” Geagea stressed.

“The government is committed to United Nations resolutions ensuring peace between the two countries,” Prime Minister Tammam Salam said Wednesday, calling on the international community to mobilize to prevent any further attacks by Israel against Lebanon.

“Israeli escalation in the border area could open the door to dangerous possibilities that will not serve peace and stability in the region,” he said, adding that the danger posed by Israel could only be fought through national unity and solidarity.

“Lebanon reaffirms its commitment to U.N. Security Council Resolution 1701 in all its clauses, and its appreciation of the efforts exerted by UNIFIL peacekeepers, who suffered the loss of one of their members from the Spanish battalion today [Wednesday].”

Lebanon’s security and safety is ensured by total adherence to U.N Resolution 1701, the Future Movement parliamentary bloc, which is headed by former Prime Minister Fouad Siniora, said in a statement.

“[The bloc] repeats its warning of the aggressive intentions and targets of the Israeli enemy, and considers that Lebanon’s safety should be at the forefront of the interests of all Lebanese factions.”

The bloc re-emphasized that the Cabinet was the only entity entitled to take “crucial and national decisions” in cases of war and peace, as per the Constitution.

“The bloc asks the Lebanese government to make the necessary calls in order to convene an urgent meeting of the U.N. Security Council and look into the volatile situation in the southern Lebanese borders.”

Ordinary Lebanese also took to social networks Twitter and Facebook, saying that if Hezbollah wanted to fight Israel, it should find another venue to launch attacks from, because Lebanese were tired of spending time, energy, and money rebuilding after Israeli responses to Hezbollah provocations.

As expected Hezbollah’s allies defended its action. Both MP Suleiman Frangieh and former minister Faisal Karami praised Hezbollah’s operation
“Lebanon’s strength is in its resistance and not with those weak in their souls,” Frangieh tweeted

The stakes for Israel and Hezbollah are huge. Tit-for-tat exchanges have previously plunged these two bitter enemies into damaging conflagrations that neither necessarily expected, most recently in the war of 2006. Despite the consensus among analysts that neither Israel nor Hezbollah seeks such an escalation at this time, the danger is once again high that they could again stumble into a significant confrontation.

“Israel has to change the policy by which it responds to missile attacks against its sovereign territory,” said Israeli Foreign Minister Avigdor Liberman, one of Netanyahu’s campaign rivals. He demanded a “harsh” and “disproportionate” response.

Speaking from Sderot in southern Israel, Netanyahu warned that Hezbollah should examine the damage inflicted on Gaza and Hamas by Israel’s offensive last summer. “Hamas suffered the most serious blow since it was founded this past summer and the [Israeli army] is prepared to act on every front,” he said.

“We view Hezbollah as responsible,” said Israeli military spokesman Brig. Gen. Moti Almoz. “This is not necessarily the end of the [Israeli army’s] response.”

A Spanish soldier serving with the 10,000-strong United Nations peacekeeping force in southern Lebanon, known as UNIFIL, was killed in the retaliatory shelling, a UNIFIL spokesman said.

Israeli army outposts in the Shebaa Farms later came under mortar fire from Lebanese territory as well as part of the adjacent Golan Heights that is under the control of the Syrian army and Hezbollah. No casualties were reported from this second attack.

Wednesday’s missile attack had been preceded by the firing of a pair of short-range rockets a day earlier from the Syrian side of the Golan into the Israeli-occupied half. The rockets exploded in open areas and caused no damage, although the Israeli military evacuated a nearby ski resort on Mount Hermon. Tuesday night, Israeli jets attacked Syrian military targets in the Golan in reprisal.

Israeli Defense Minister Moshe Yaalon said that the air raids were a “clear message” that Israel would respond “with force and determination” to attacks on its sovereignty.

Still, if Israel chooses to de-escalate it will have left the perception that Hezbollah has restored its ability to deter Israeli attacks after the losses it suffered in the surprise drone strike ten days ago. But new Israeli strikes against Hezbollah targets in Lebanon would raise pressure on the movement’s leadership to order further retaliation, accelerating a cycle of escalation.

Hezbollah is considered the most militarily capable of the Arab armies that have challenged Israel and possesses a considerable arsenal of missiles that could target key Israeli cities.

Beyond claiming responsibility for the missile ambush, Hezbollah has said little. The movement’s leader, Hassan Nasrallah, is due to make a keynote speech on Friday afternoon, during which he is expected to elaborate on his party’s stance toward the current tensions.

By that time, Israel’s choices will also be known.