Greece may default and leave the Eurozone , report 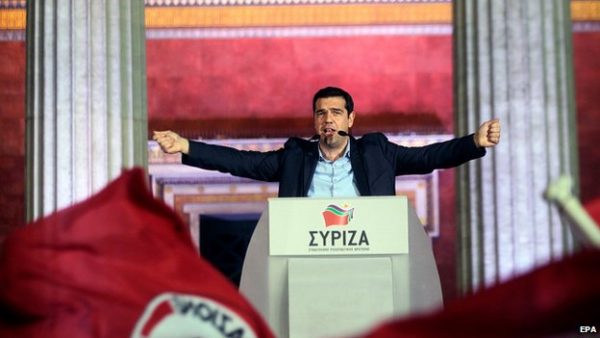 It is unrealistic to expect Greece to repay its huge debt in full, the chief economics spokesman for the victorious Syriza party has told the BBC.

“Nobody believes that the Greek debt is sustainable,” Euclid Tsakalotos said.

EU leaders have warned the new Greek government that it must live up to its commitments to the creditors.

Syriza leader Alexis Tsipras – who was sworn in as prime minister on Monday – is expected to unveil his new cabinet later on Tuesday.

‘Dangerous Europe’
“I haven’t met an economist in their heart of hearts that will tell you that Greece will pay back all of that debt. It can’t be done,” Mr Tsakalotos said.

He said that EU leaders needed now to show that they were willing to work with Syriza.

“It’s going to be a very funny and a very dangerous Europe with very strong centrifugal political forces if they signal that after a democratic vote they’re not interested in talking to a new government.

But Mr Tskalotos stressed that it would be “my worst nightmare if the eurozone collapses because Greece falls”.

And if Syriza were to lose in talks with Brussels and Berlin, and the final rupture of Greece from the euro were to take place, investors might well pull their savings from any eurozone country where nationalists are in the ascendant.

So why are investors not in a state of frenzied panic? Why have the euro and stock markets bounced a bit? One slightly implausible explanation is that investors believe the eurozone would actually be stronger without Greece, so long as no other big country followed it out the door.

Mr Tsipras earlier stressed that he wanted negotiation – not confrontation – with international lenders.

“The new Greek government will be ready to co-operate and negotiate for the first time with our peers a just, mutually beneficial and viable solution,” he said.

The troika of lenders that bailed out Greece – the European Union, European Central Bank, and International Monetary Fund – imposed big budgetary cuts and restructuring in return for the money.

Jeroen Dijsselbloem: “The major problems in the Greek economy have not disappeared”
He said it “is not on the radar” of the commission.

German government spokesman Steffan Seibert stressed it was important for Greece to “take measures so that the economic recovery continues”.

Jeroen Dijsselbloem, president of the Eurogroup, said on Monday: “There is very little support for a write-off in Europe.”

Syriza’s victory has caused some concern in the financial markets.

In a volatile start to the week the euro briefly touched an 11-year low against the dollar early on Monday, before recovering to trade almost 0.7% higher against the US currency.

A look at possible scenarios if Greece defaults and leaves the Eurozone:

Living standards in Greece could fall, banks will face the prospect of collapse, savings may be frozen, businesses could go bankrupt and the cost of imports could multiply.

Regular citizens will empty their bank accounts before they converted into a new currency worth less than the previous one. The government may impose a freeze on withdrawal and banks from other countries that have lent to Greece could also collapse.

Due to legal tangles over the nature of currency in contracts, Greek businesses may face legal and financial disaster. Companies will still owe big debt but will pay in devalued non-euro currency. Many businesses will become insolvent and face bankruptcy while lenders and biz partners of local companies will be looking at big losses.

Investors could become nervous about lending to other struggling countries, This might leave Spain and Italy, which account for 28% of the total economy of the Eurozone, short of funds.

A Greek exit from the Eurozone could force lenders and investors to sell off their risky investments. This will cause the stock markets to crash. High-risk borrowers may face higher borrowing costs, Certain safe investments like the dollar, en, Swiss franc, gold could rise and these governments could borrow cheaper.

European governments and banks will face big losses on the loans they gave which will prevent some bigger nations like Germany, providing bailouts to other countries that might need it. ECB’s role of providing rescue loans could be exposed.

European banks will be forced to stop lending and business will then cut investment. Ordinary people may cut back their own spending due to bad news in the media. This might push the country in to recession.

The country will not be able to borrow from anyone and the government will eventually run out of euros. It will have to pay social benefits and civil servants’ wages in IOUs (if it pays them at all) until a new currency is introduced. All repayments of debts will stop and Greek banks will go bust, since they won’t be able to lend to the government.