Over 30 Filipino police commandos killed in clash with rebels 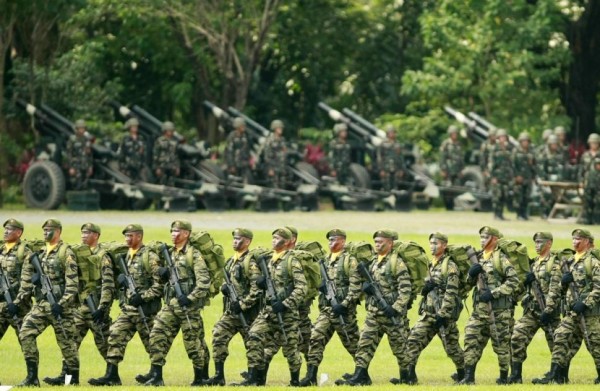 More than 30 police commandos were killed in a clash with Muslim insurgents Sunday in the southern Philippines in the biggest single-day combat loss for Filipino forces in many years, officials said.

Dozens of commandos had entered the far-flung village of Tukanalipao at dawn looking for a top terror suspect, but had a “misencounter” with members of the Moro Islamic Liberation Front, Mayor Tahirudin Benzar Ampatuan of Mamasapano town told The Associated Press by telephone.

Other insurgents in the area later joined in fighting the outnumbered police forces, the mayor said.

The 11,000-strong Moro group signed a peace deal with the government last year and forged a cease-fire, which has been safeguarded by a Malaysia-led team of foreign truce monitors and has halted major conflicts between the two sides for years.

Ampatuan, the Moro group and military officials said the police commandos did not coordinate their plan to enter the Muslim rebel village before sunrise, apparently resulting in the fierce fighting.

The fighting in the marshy village of cornfields and coconut plantations subsided after several hours when members of a cease-fire committee and foreign truce monitors intervened, Ampatuan said, adding he deployed a team of village leaders and guards, who saw more than 30 of the slain commandos scattered in the battle scene.

“What they described to me was gruesome,” Ampatuan said.

At least two villagers were wounded in the gunbattle. A few thousand villagers fled from their homes near the scene of the fighting, he said.

At least two Philippine security officials told The AP that the target of the police commandos was Zulkifli bin Hir, a Malaysian terror suspect known also as Marwan, who has been blamed by U.S. and Philippine authorities for several deadly bombings in the south. Marwan, who allegedly has provided bomb-making training and funds to local al-Qaida-linked militants, is believed to have been hiding in the country’s south since 2003.

The two officials spoke on condition of anonymity because they were not authorized to talk to reporters about operations to capture Marwan, who they said may have been wounded or killed in Sunday’s fighting.

Aside from Moro rebels, hardline insurgents who broke off from the main Moro group a few years ago because they opposed peace talks with the government also inhabit Tukanalipao and outlying villages. Some of the Moro rebels and breakaway insurgents are relatives and co-exist in the same villages.

Ampatuan said his village leaders managed to extricate only five of the policemen’s bodies by nightfall because they were afraid for their safety amid sporadic gunfire and the darkness in the village, which is 2 to 3 kilometers (1.2 to 1.9 miles) from the nearest road.

It remains unclear how many police commandos entered the village, he said, adding the death toll would likely increase.

An initial police report seen by AP said at least 37 police commandos perished in the fighting while 6 insurgents were killed and 11 others wounded.

Military spokesman Col. Restituto Padilla said government troops were helping the police retrieve the dead from the scene of the clash. “No military units were involved the fighting,” he said.

While the tragic fighting underscored the difficulty of forging peace in the long-volatile southern region, homeland of minority Muslims in the predominantly Roman Catholic country, it also showed how the cease-fire and the foreign truce monitors, troops and rebels who jointly enforce it have effectively prevented occasional flareups from degenerating into a full-blown fighting that could endanger the peace deal.

The pact, which was signed in March, aims to establish a more powerful and better-funded autonomous region for minority Muslims in the south and end a decades-long rebellion. The conflict has left 150,000 people dead and helped stunt development in the country’s poorest region.

At least four smaller armed groups, including the al-Qaida-linked Abu Sayyaf group, have continued fighting government forces and staging attacks in the south.