Iraq wants arms on credit from the West 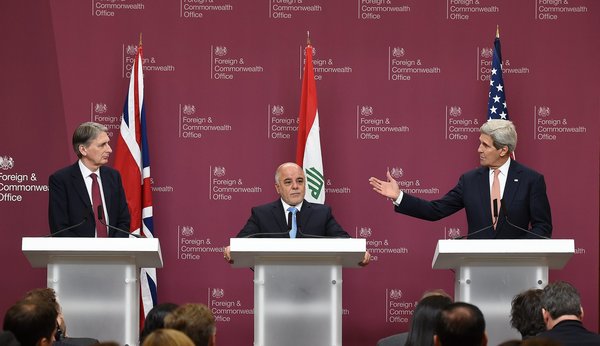 Prime Minister Haider al-Abadi of Iraq spoke at a news conference in London on Thursday with Secretary of State John Kerry, right, and Philip Hammond, the British foreign secretary. Credit Pool photo by Andy Rain
Share:
Battered by a sharp decline in oil prices, Iraq is asking Western allies to provide weapons on credit for its fight against the Islamic State until Baghdad is in a better position to pay.

Prime Minister Haider al-Abadi of Iraq said on Thursday that oil exports accounted for 85 percent of his government’s budget and that the precipitous drop in prices was posing a fresh challenge to the Iraqi government as it was trying to push back Islamic State militants.

“This has been disastrous for us,” Mr. Abadi said. “One thing we are asking for is deferred payment. That’s one solution. And I think our coalition partner has been very receptive of this.”

Mr. Abadi spoke at a news conference here with Secretary of State John Kerry and Philip Hammond, the British foreign secretary, after a meeting of 21 countries that are trying to weaken, and ultimately defeat, militants from the Islamic State who have proclaimed a caliphate that stretches from eastern Syria to northern and western Iraq.

American officials insist that they have broken the Islamic State’s momentum in Iraq, a claim President Obama echoed in his State of the Union address. Mr. Kerry sought to reinforce that claim by asserting that 50 percent of the Islamic State’s “top command” had been killed and that much of the oil and gas infrastructure that the Islamic State uses to fund its operations had been destroyed.

In Baghdad, Stuart Jones, the United States ambassador to Iraq, told the news channel Al Arabiya that 6,000 Islamic State fighters had been killed in Syria and Iraq.

But the task of expelling the Islamic State militants from Mosul, Falluja and other urban areas they have seized in Iraq remains challenging for Iraq’s armed forces even though they are supported by American and allied airstrikes.

The Iraqi plan to establish national guard units in northern and western Iraq made up of Sunni tribal fighters is tied up in knots in Baghdad. A stopgap effort to train and equip Sunnis in western Iraq has so far yielded only about 1,000 fighters, who will be used to replenish losses in Iraqi police and Army units.

The United States and its partners still need to train 12 more Iraqi brigades — more than 20,000 troops — so that Iraq can conduct a major counteroffensive against the Islamic State later this year.

The military challenge that Iraq faces was dramatized this week when the Ramadi compound that belongs to Abu Risha, a Sunni tribal leader, was destroyed by Islamic State militants while he was on a visit to Washington.

American officials said in November that the Iraq government’s goal was to wrest control of Mosul, Falluja and other cities and major roads by the end of 2015. Iraqi forces, the officials added, would move to re-establish control of Iraq’s border with Syria by the end of the year.

But on Thursday, Mr. Hammond indicated that the military campaign could take twice as long.

“This isn’t going to be done in three months or six months. It’s going to take a year, two years to push ISIL back out of Iraq but we are doing the things that need to be done in order to turn the tide,” Mr. Hammond told Sky News, using an alternative name for the Islamic State, which is also known as ISIS.

Mr. Abadi had appealed to Western governments to expand and accelerate their efforts to train and equip Iraqi forces before the London meeting. “There is a lot being said and spoken, but very little on the ground,” he told The Associated Press on Wednesday.

But Mr. Abadi said on Thursday that his appeal for more help “did not go unnoticed.” Flanked by Mr. Kerry and Mr. Hammond, the Iraqi leader said that European nations had recently provided weapons, which the United States Air Force had flown to Iraq, at no charge.