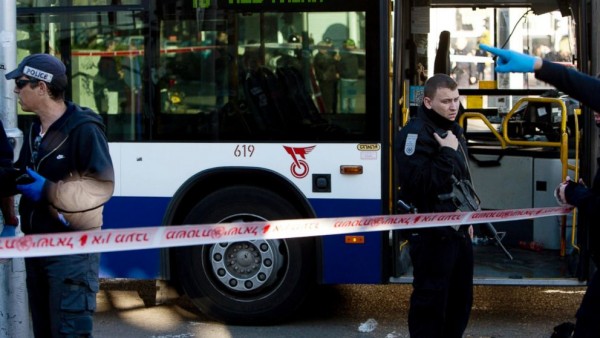 Israeli police say they have shot a Palestinian man from the West Bank who stabbed at least 10 people in an attack on a bus in central Tel Aviv.

The incident occurred on Maariv bridge where the suspect attacked people both on and outside the bus, police said.

Police say they are treating the incident as a terrorist attack.

The perpetrator attempted to flee the scene following the attack, and was lightly wounded after being shot in the leg, a police spokeswoman said.

Three of the victims were in a serious condition, with four others in a moderate condition and three lightly wounded, according to the ambulance services.

The street around Maariv bridge has been closed.

Police officials said that the suspect was a 23-year-old illegal worker from Tulkarem, a town in the occupied West Bank.

“The terrorist stabbed the bus driver several times but the driver fought back until he [the suspect] fled on foot and was neutralised by a guard from the prisons’ service,” a police statement said. 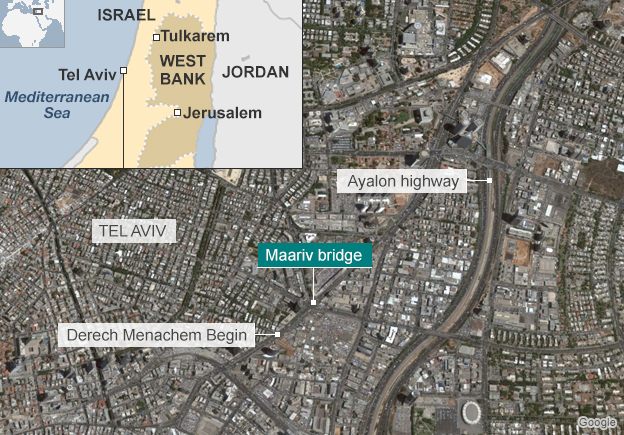 Eyewitnesses said the driver fought back by using pepper spray on the attacker.

“We saw the bus swerve to the side… then stop at a green light,” the officer, identified only as Benny, said.

“Suddenly we saw people running out of the bus and when we saw them shouting for help, we jumped out… and started running after the terrorist. At first we fired in the air, then at his legs.”

The attack was “the direct result of the poisonous incitement being disseminated by the Palestinian Authority against the Jews and their state”, he said.

The government has been angered by Mr Abbas’ efforts to secure Palestinian membership of the International Criminal Court (ICC) and agreement to a unity government with militant group Hamas.

The Palestinians blame Israeli government policies, particularly the expansion of settlements, for the increase in violence, correspondents say.

Speaking from Qatar, he described it as “a natural response to the crimes of the occupation and terrorism against the Palestinian people”.

Israeli police say there has been a pattern established in recent months where individual Palestinians, without sophisticated weapons, have attacked civilians at random, the BBC’s Kevin Connolly in Jerusalem reports.

Late last year, a number of Israelis were killed in attacks by Palestinians using weapons including knives and even vehicles to run down pedestrians.

In one of the deadliest attacks, four rabbis and a policeman were killed in November when two Palestinians armed with a gun and meat cleavers attacked a synagogue in West Jerusalem.

Our correspondent says the latest round of tensions began to increase last year, after the summer conflict in Gaza and disputes over access to religious sites in the old city of Jerusalem.

More than 2,100 Palestinians were killed in Gaza during the Israel-Gaza conflict, the majority of them civilians according to the UN.