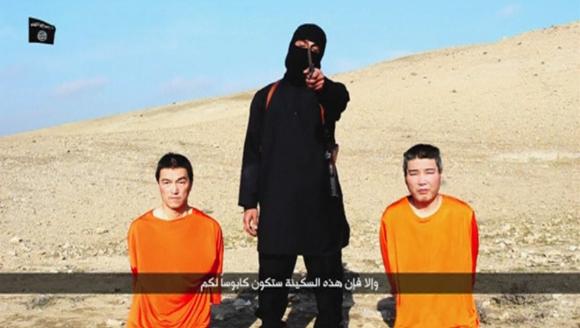 A masked person holding a knife speaks as he stands in between two kneeling men in this still image taken from an online video released by the militant Islamic State group on January 20, 2015. The masked person was identified last week as Mohammed Emwazi, a British national who was born in Kuwait . Until he was unmasked the world knew him better as “Jihadi John. REUTERS/Social media website via Reuters TV
Share:

The militant group Islamic State released an online video on Tuesday purporting to show two Japanese captives and threatening to kill them unless it received $200 million in ransom.

A black-clad figure with a knife, standing in a barren landscape along with two kneeling men wearing orange clothing, said the Japanese public had 72 hours to pressure their government to stop its “foolish” support for the U.S.-led coalition waging a military campaign against Islamic State.

“To the prime minister of Japan: Although you are more than 8,500 km away from the Islamic State, you willingly have volunteered to take part in this crusade,” said the militant, who spoke in English.

He demanded “200 million” without specifying a currency, but an Arabic subtitle identified it as U.S. dollars.

The footage named the men as Haruna Yukawa and Kenji Goto.

The video was not dated, but on a visit to Cairo on Jan. 17, Japanese Prime Minister Shinzo Abe pledged around $200 million in non-military assistance for countries battling Islamic State.

Abe, speaking in Jerusalem on Tuesday near the end of a six-day tour of the Middle East, said Islamic State’s threat against the two purported captives was “unacceptable”.

“Extremism and Islam are completely different things,” Abe said. “We strongly demand the immediate release of the Japanese citizens unharmed … The international community needs to respond firmly and cooperate without caving into terrorism.”

The video resembled others distributed by Islamic State outlets in which captives were threatened or killed. It appeared to be the first time that an Islamic State video specifically demanded cash for captives.

Abe stressed that Japan’s aid announced on his trip was for humanitarian purposes, and said Tokyo would keep contributing to peace and prosperity in the region.

“We’ll coordinate with the international community from now on, and contribute more to (the) peace and prosperity of the region. This policy is unwavering and we won’t change this policy.”

The apparent capture of the two men marks the first hostage crisis for Abe’s government since January 2013, when 10 Japanese were killed by Islamist militants at a gas complex in Algeria.

Asked whether Japan would pay ransom to secure the captives’ release, Abe replied: “With regard to this case, we attach the utmost priority to saving lives, and gathering information with the help of other countries.”

In Tokyo, Japan’s foreign ministry said it was checking the authenticity of the video. In televised remarks, Parliamentary Senior Vice-Minister of Defense Akira Sato told reporters that, after viewing the footage, he thought it might be a “composite”.

Goto is a freelance reporter who was based in Tokyo. He has written books on AIDS and children in war zones from Afghanistan to Africa and reported for news broadcasters inJapan.

Goto met Yukawa last year and helped him travel to Iraq in June, he told Reuters in August.

Yukawa, 43, traveled to Iraq and Syria last year after telling friends and family that he thought it represented a last chance to turn his life around.

Over the previous decade, he had lost a business to bankruptcy, lost his wife to cancer and become homeless, according to his father and an online journal.

It was not clear what exactly he was doing in the region. Yukawa’s father, Shoichi Yukawa, declined to comment, saying he was overwhelmed by the news reports.

The militant in the footage, who spoke with a British accent, appeared to have the same voice as a jihadist shown with captives in previous Islamic State videos.

The hardline Islamist group, which holds territory in Syria and Iraq, has also killed more than 1,000 Syrians off the battlefield since it expanded a caliphate under its control in June, according to a monitoring group.