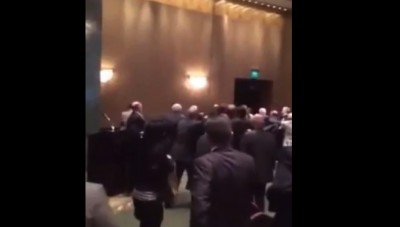 “This is an unprecedented phenomenon, especially since the Arab Lawyers Union was established to be a model and not to move Arab states’ differences to this Union,” Jreij told Voice of Lebanon radio station.

He expressed concerns over the “acts of intimidation against one of the lawyers who was voicing his opinion.”

“Response is everyone’s right and difference of opinion is sacred,” Jreij said.

The Lebanese lawyers delegation was assaulted Sunday by members of the Syrian delegation as Lebanon’s representative was delivering a speech on terrorism at the Conference .

The assault happened as “Fadi Saad, the coordinator of Future movement’s lawyers dept., was delivering a speech before the committee specialized in terrorism affairs,” Future added.

“As the lawyer Saad was delivering his speech, he was interrupted several times by Assad’s representatives, before they assaulted him and Lebanese delegation members Jabil Qambris and Munir al-Husseini,” the statement said.

The statement called on the Arab Lawyers Union to “take a decisive stance on what happened and exclude the representatives of the Assad regime from participation in the conferences of Arab lawyers.”

He also called for “boycotting” the Syrian regime and “taking the appropriate measures against it by depriving it of participation in the Arab legal and judicial conferences and forums,” urging Cairo to “penalize the perpetrators of this attack.”