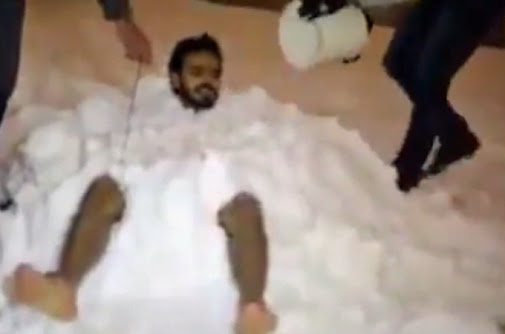 Ehab Yousef, a young Syrian actor, posted a video of himself getting covered in buckets of snow for two minutes. In it, he urged President Bashar Assad to go outside in the snow for two minutes or spend a night in a refugee camp with his family
Share:

Syria’s president has been dared to undergo a “snow bucket challenge” to raise awareness of Syrian refugees living in freezing winter conditions in camps across the region.

In a nod to the Ice Bucket Challenge that became a social media craze last summer, Ehab Yousef, a young Syrian actor, posted a video of himself getting covered in buckets of snow for two minutes. In it, he urged President Bashar Assad to go outside in the snow for two minutes or spend a night in a refugee camp with his family, Al-Jazeera reports.

“Think of us when you’re warm,” Yousef said to Assad in the video.

Lack of protection from the cold so far has killed more than seven people in Syria and four in Lebanon, Al-Jazeera reports.

The Ice Bucket Challenge raised more than $100 million last year for the ALS Association, a group that is seeking a cure for amyotrophic lateral sclerosis, a neurological disease also known as Lou Gehrig’s Disease. Other variations on the viral hit include the Rubble Bucket Challenge, which used rubble, dirt and dust from the remnants of buildings decimated by airstrikes to raise awareness of the situation in Gaza last summer.

“I urge all the people around the world to donate whatever they can—money, medicine, blankets—to help the desperate refugees in the camps,” Yousef says in the video. He urges Assad to “come out from his hideout and show support for the people who are dying in the refugee camps.”

Many of the millions of Syrians displaced by war are spending their fourth winter battling freezing conditions in makeshift camps. Snowfall has been particularly heavy in Lebanon’s Bekaa Valley, where 408,000 United Nations–registered refugees live in camps. More than 3.2 million Syrians have fled the country and 7.6 million are internally displaced, according to the U.N. Office for the Coordination of Humanitarian Affairs.

Last week, Lebanon, which hosts 1.1 million Syrian refugees, started requiring Syrians to obtain a visa to enter to country in an effort to stem the flow of people fleeing violence.

The Syrian Association of Ottawa held its fourth #KeepUsWarm event in December to raise money for Syrians in the snow. Members of the organization stood in the cold in tank tops and took part in other dares in Ottawa; for every $10 donation (the cost of a blanket), one of them got to warm up under a blanket for three minutes.

In a report published on Sunday, UNICEF said it needs $11.3 million to help deal with winter conditions in Syria, Turkey, Egypt and Lebanon.