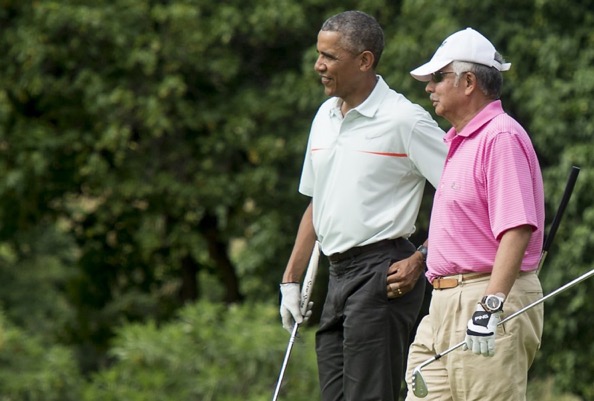 At least five states in Malaysia have been hit by the country’s worst floods in decades, leaving at least five dead, including a child, and more than 100,000 displaced.

The disaster has prompted Malaysia’s prime minister Najib Razak to cut short his US vacation on Friday in order to deal with his country’s crisis.

More than 105,000 people have sought shelter in schools, community halls and other relief centres, according to flood monitoring centres.

Najib had come under fire for going on holidays in Hawaii, where he was seen golfing with US president Barack Obama, prompting him to release a statement saying he would return on Saturday and head straight to the flood-ravaged Kelantan state to oversee relief efforts.

“I am deeply concerned by the floods. I feel for the people who have lost their homes, and the families who have lost loved ones,” he said. “I want to see the situation for myself and be with the people”.

The government says it was the worst flooding in more than 30 years, and on Friday ordered the deployment of more helicopters, boats and land vehicles.

Najib has said earlier bad weather and high floodwaters made it tough to transport displaced people and food supplies. Heavy rain was expected to continue until the weekend, the meteorological department said.

Neighbouring Thailand has also been battered by severe and deadly flash floods.

The country’s disaster prevention and mitigation department on Friday declared disaster zones in eight of its southern provinces after floods killed at least 13 people.

The zones are in Surat Thani, Nakhon Sri Thammarat, Pattalung, Pattani, Yala, Narathiwat, Songkhla and also Trang, which has been flooded since mid-December.

Five people have also been injured in the floods and more than 184,000 households have been affected by the floods and nearly 8,000 displaced, according to the department.

Although the water level is receding in Nakorn Sri Thammarat and Surat Thani provinces, authorities are monitoring the situation around the clock.