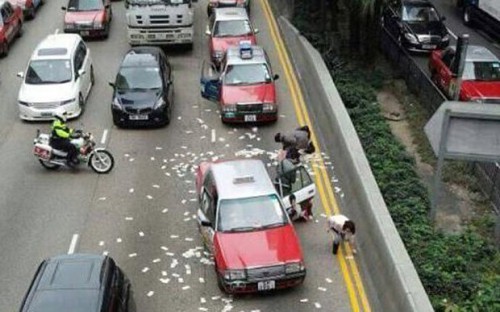 An armored van spilled nearly US$2 million in cash onto the westbound lane of one of Hong Kong’s busiest thoroughfares on Christmas Eve, bringing traffic to a halt as people jumped out of their cars and scrambled to scoop up money.

Photos posted on local news outlets showed taxi drivers and passengers crouching in the middle of Gloucester Road in Wan Chai on Wednesday afternoon as they tried to grab some of the scattered 500 Hong Kong dollar notes, which are worth about US$65 apiece.

Three containers carrying HK$15.23 million of cash slid out of the van through the rear door, which wasn’t properly closed, police said, but an investigation into the cause of the incident is continuing.

The van was transporting a total of 30 containers of cash from Hong Kong Island to Kowloon on the opposite side of Victoria Harbour.

Police sealed off the affected lanes of the highway to retrieve the loose cash. Officers armed with rifles and wearing bulletproof vests were seen guarding the three containers that had fallen onto the road.

Authorities are calling on people who recovered any of the lost cash to return it to the police; otherwise, they say, they could face prosecution for theft.

Parts of Gloucester Road were affected by the recent pro-democracy protests in the city, but traffic had returned to normal since the protest sites were cleared earlier this month.