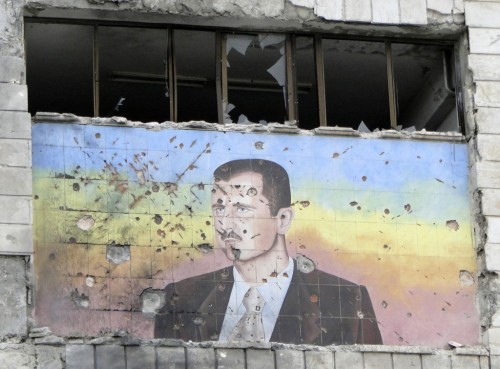 A picture of Syria’s President Bashar al-Assad riddled with holes on the facade of the police academy in Aleppo, after it was captured by Free Syrian Army fighters, March 4, 2013. REUTERS/Mahmoud Hassano
Share:

By David Axe
In early 2015, the civil war in Syria will turn four years old. If current trends hold, the terrible conflict — which has killed hundreds of thousands of people and displaced millions — will almost certainly continue to rage through the end of the year. That’s my prediction.

This is largely because the regime of Syrian President Bashar al-Assad, with Tehran’s help, has transformed its professional army into a militia-style amateur force that’s cheap and easy to train. Its ranks are filled by eager young men, who are numerous in pro-Assad Syria.

However, the same militia force that allows the regime to keep fighting also lacks the mass, mobility and firepower to mount a decisive offensive against the rebels. One that would stand a chance of recapturing northern and eastern Syria from secular rebels and Islamic State militants and end the war on Damascus’ terms.

Combined with the rebels and militants’ own similar limitations, it’s a recipe for a stalemate. And another year of grinding warfare.

When the war began amid mass protests in spring 2011, Assad’s army was a conventional force, organized along typical Middle East lines. It included some 220,000 soldiers. Officers were full-time professionals. Most junior enlisted soldiers were conscripts.

It was largely a mechanized army, one that Damascus had optimized for battling Israel’s heavy forces. In 2011, the Syrian army possessed as many as 5,000 tanks and thousands of other armored vehicles.

When regime forces opened fire on protesters, sparking the initial rebellion, thousands of soldiers defected to the opposition Free Syrian Army, which quickly grew to a force of roughly 200,000 men. The fierce fighting destroyed entire towns and cities, displacing millions of people, and the rebels seized much of northern and eastern Syria.

At least 39,000 regime soldiers died in fighting through July 2014, according to the British-based Syrian Observatory for Human Rights. It’s safe to assume that many times that number were seriously injured.

But it wasn’t enough for the rebels to merely kill or wound tens of thousands of regime soldiers and damage or destroy thousands of tanks. Damascus has an air force — a key advantage. The regime also soon had serious outside help. Iran, Assad’s long-time ally, sent the Lebanese militant group Hezbollah into Syria to help the regime. Members of Tehran’s Revolutionary Guard Corps were also deployed to Syria to boost Assad’s forces, with roughly 5,000 volunteers from Iraq’s Shi’ite majority.

Meanwhile, foreign jihadists infiltrated Syria and drew many rebel fighters to their ranks, dividing the Free Syrian Army. This transformed the rebellion into a three-way fight among regime, rebels and militants. In the first three years of the war, about 18,000 rebels and militants died in combat, according to the Syrian Observatory for Human Rights.

By 2014, the old Syrian army was a spent force. In May, a rebel sniper killed Iranian General Abdullah Eskandari in battle near Damascus. Opposition fighters seized Eskandari’s notebook and published its contents online, including a frank description of the Syrian army’s “dissipation and disintegration” in Hama province in west-central Syria. It’s safe to assume the army was in a similarly poor state in other provinces.

But that didn’t matter. Because by then the Iranians had essentially replaced the Syrian army with a militia called the National Defense Force, which draws many of its volunteers from the Alawite religious group — the regime’s main supporters — and also requires minimal training and support to function. What the volunteers lack in expertise and experience, they make up in patriotic fervor.

This fall, an Iranian Revolutionary Guard Corps fighter named Sayyed Hassan Entezari gave a shockingly candid interview to a corps-funded website, in which he detailed the creation of the National Defense Force by Iranian agents.

“The Syrian army couldn’t handle this three-year crisis because any army would be fatigued [after that long],” said Entezari, paralyzed after being badly wounded while fighting in Syria. “Iran came and said why don’t you form popular support for yourself and ask your people for help.”

Tehran’s agents helped build support for the volunteer National Defense Force. “Our boys went to one of the biggest Alawite regions,” Entezari recalled. “They told the head of one of the major tribes to call upon his youth to take up arms and help the regime.”

Entezari explained that National Defense Force volunteers serve 45 days at a time on the front line before returning home. “Of course,” he pointed out, “some of them get martyred.”

Damascus equips volunteers with weapons from the disintegrating army, including many of the surviving tanks. Spreading the heavy weaponry across widely scattered militia units bolsters the volunteers’ local firepower but also prevents Damascus from concentrating force for a decisive attack into rebel-held territory.

This lack of decisive force worried Eskandari. In his notebook, he brainstormed ideas for punching through rebel lines. One was bringing in specialized “line-breaker” troops from Iran. But not long after Eskandari died, Iran diverted some troops in Syria to Iraq to help battle Islamic State. It seems unlikely Tehran will be able to significantly boost its contingent in Syria.

More than 24,000 National Defense Force volunteers have died in combat, according to the Syrian Observatory for Human Rights. But there are three million Alawites in Syria, more than enough to sustain the National Defense Force for years to come, barring an unlikely collapse in Alawite support for the regime.

That means Damascus can keep fighting through 2015. But it can’t win — and neither can the rebels or the militants. The rebels still struggle to obtain heavy weaponry for their two-front war. For their part, Islamic State militants have picked simultaneous fights with the Syrian regime, the Free Syrian Army, Iran, Iraq and a growing U.S.-led coalition.

I predict that a year from now not much will have changed in Syria. Except for increases in the death toll and the roster of the displaced.