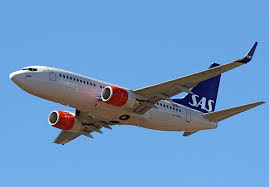 But the Russian Defense Ministry refuted the notion that one of its warplanes nearly collided with a passenger jet.

And a spokesman for Scandinavian Airlines said reports of danger to the plane or passengers were “blown out of proportion.”

“No security borders were breached,” he said, adding that it was a “totally safe flight.”

Byden said Swedish fighter jets were immediately deployed to identify the aircraft and later determined it was a Russian intelligence plane. He said the Russian military aircraft’s transponders were turned off to avoid commercial radar.

A Russian Defense Ministry spokesman maintained the flight was a safe distance from civilian aircraft.

“No prerequisites existed for an air accident related with a flight of a Russian warplane in the international air space over the Baltic Sea on Friday,” Maj. Gen. Igor Konashenkov said Sunday, according to Russia’s state-run TASS news agency.

“The flight was being made strictly in compliance with international air space rules, not violating borders of other countries and at a safe distance from traffic routes of civilian aircraft,” he said. Konashenkov said the Russian plane was more than 70 kilometers (44 miles) from the flight route of a passenger jet.