Coming soon a bracelet that turns your ARM into a touchscreen 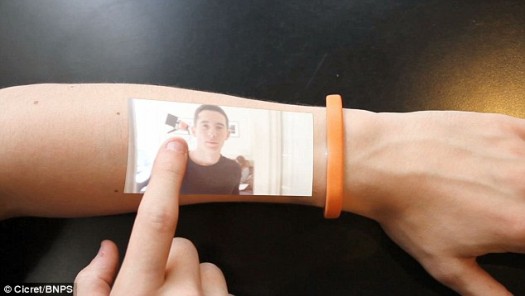 From Apple’s forthcoming smartwatch to the Fitbit, there is fierce competition to get consumers hooked on wearable devices.

And soon there will be a bracelet that turns your skin into a touchscreen using a tiny built-in projector.

Wearers of the of the Cicret bracelet will be able to check an email or watch a film that’s projected onto their forearm, and control the picture by using their skin like a touchscreen.

The makers of the device, who are currently raising money to put it into production on their website, say it can do anything a phone or tablet can, allowing wearers to read emails, surf the web, watch videos, play games and even make phone calls without relying on a conventional screen.

A tiny projector in the bracelet will cast an image onto the skin then eight long-range proximity sensors will detect every swipe, tap and pinch.

The bracelet will also contain a USB port and accelerometer as well as supporting Bluetooth and Wi-Fi.

While it will be made so it can sync with an iPhone, it’s designed to be a stand-alone device.

A promotional video suggests that the bracelet will spring to life with the flick of a wrist and could be used to answer a phone call.

Guillaume Pommier, who founded technology company Cicret with Pascal, his software developer father, told MailOnline: ‘We plan to put a 3G card [in the bracelet] to allow calls.’

He explained that the device may use a new technology that allows SIM details to be put into the hardware, instead of requiring its own SIM card.

It’s still in development, but a working prototype is due to be unveiled in a few weeks’ time and Mr Pommier hopes that the bracelet could be on the shelves by June next year.

Mr Pommier, who is from Paris but lives in Leeds, said: ‘The Cicret bracelet is a revolutionary device which could completely change how we access information.

‘The applications for the bracelet are vast – it will be able to do anything a phone or tablet can do but without the need for a hard screen.

‘Not only is it more portable but it’s also more ecological too because it is the screen part of tablets and phones that is hard to dispose of.

‘The amazing thing is that we haven’t invented anything new – we just combined two existing technologies to create something really special.

‘We think the bracelet will revolutionise the technology world.’