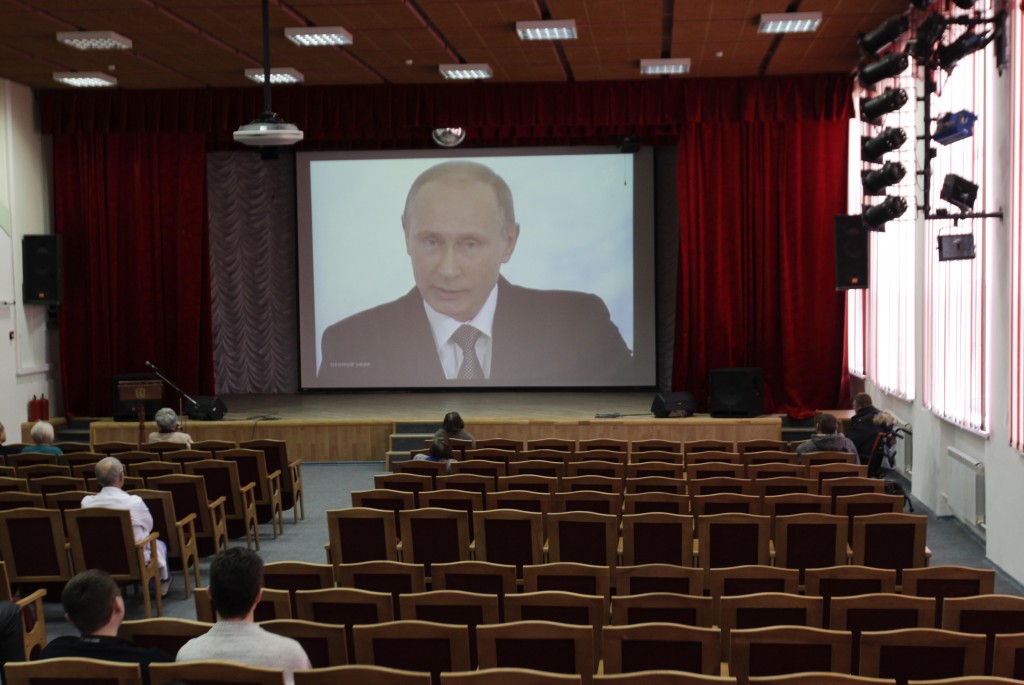 TV broadcast showing Russia’s President Vladimir Putin delivering his annual state of the union speech to members of parliament and other top officials in the Kremlin, in Stavropol, December 4, 2014.
Share:

President Vladimir Putin’s elevation of Crimea to the status of Russia’s Holy Land has prompted puzzlement and scorn from historians and commentators.

Crimea for Russians is “like the Temple Mount in Jerusalem” for Muslims and Jews, Putin said, and would be regarded this way “from now on and forever.” Vladimir the Great was baptized in Kherson, Crimea, Putin explained in his annual state of the Union address yesterday to parliament and top officials in Moscow, an event in 988 that is considered to be the beginning of the Christianization of Kievan Rus, a precursor state to Russia and Ukraine.

“Prince Vladimir was Kievan, not Muscovite, and this probably only underlines the right of Kiev and not Moscow to Crimea,” Andrei Zubov, a Russian historian and political scientist, said in an interview.

Putin’s new Crimea myth added a religious aspect to Russia’s confrontation with the U.S. and the European Union after it annexed the peninsula from Ukraine in March. EU and U.S. sanctions have helped to push the Russian economy to the brink of recession as it wrestles with a 39 percent slump in the value of the ruble against the dollar this year and a one-third decline in the oil price. Russia depends on oil and gas revenue for about half of its federal budget.

Historians argue over whether Vladimir was baptized in Vasilev, near Kiev, rather than Kherson, said Zubov, who lost his post at the Moscow State Institute of International Relations in March after he compared Putin’s takeover of Crimea to Nazi leader Adolf Hitler’s annexation of Austria in 1938.

From a religious viewpoint “Kiev is a much more important place for Russian Orthodox pilgrims than Crimea,” said Deacon Andrei Kuraev, a theologian and a popular Russian blogger. It’s “incorrect” to compare Crimea with the Temple Mount, the holiest place on Earth for Jews, he said.

Putin’s comparison of Crimea with Jerusalem is “not a very successful move” to justify Russia’s actions, said Igor Danilevsky, head of historical research methods at Moscow’s Higher School of Economics.

“The historical part of the speech was very strange,” Gleb Pavlovsky, a former Kremlin adviser, said by phone. “Many Russians will be amused to hear about comparisons of Russians with Jews and of Crimea with Jerusalem.”