Russia has taken advantage of lower gold prices to pack the vaults of its central bank with bullion as it prepares for the possibility of a long, drawn-out economic war with the West.

The latest research from the World Gold Council reveals that the Kremlin snapped up 55 tonnes of the precious metal – far more than any other nation – in the three months to the end of September as prices began to weaken.

Vladimir Putin’s government is understood to be hoarding vast quantities of gold, having tripled stocks to around 1,150 tonnes in the last decade. These reserves could provide the Kremlin with vital firepower to try and offset the sharp declines in the rouble.

Russia’s currency has come under intense pressure since US and European sanctions and falling oil prices started to hurt the economy. Revenues from the sale of oil and gas account for about 45pc of the Russian government’s budget receipts.

The biggest buyers of gold after Russia are other countries from the Commonwealth of Independent States, led by Kazakhstan and Azerbaijan.

In total, central banks around the world bought 93 tonnes of the precious metal in the third quarter, marking it the 15th consecutive quarter of net purchases. In its report, the World Gold Council said this was down to a combination of geopolitical tensions and attempts by countries to diversify their reserves away from the US dollar. 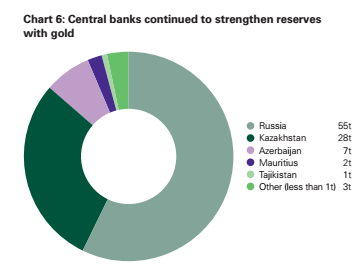 By the end of the year, central banks will have acquired up to 500 tonnes of gold during the latest buying spell, according to Alistair Hewitt, head of market intelligence at the World Gold Council.

“Central banks have been consistently adding to their gold holdings since 2009,” Mr Hewitt told the Telegraph. In the case of Russia, Mr Hewitt said that the recent increases in its gold holdings could be a sign of greater geopolitical risk that has arisen since it seized Crimea sparking a dispute with Ukraine and the West.

Overall, the World Gold Council said that global demand for gold was down 2pc year-on-year to 929 tonnes in the third quarter amid signs that buying in China, one of the main markets, had tailed off. Jewellery demand in the quarter ending in September was down 39pc to 147 tonnes, signalling weaker consumer sentiment in the world’s second-largest economy.

However, demand for gold in India has rebounded sharply since the election earlier this year of prime minister Narendra Modi. Demand for jewellery in the world’s most populous democracy grew by 60pc year-on-year to 183 tonnes in the third quarter.

Gold prices have fallen about 7pc since October to trade at around $1,160 per ounce and the asset class is expected to post its second straight yearly loss. The precious metal has bounced since hitting a four-year low at the beginning of the week but sentiment remains weak despite the World Gold Council’s latest outlook.