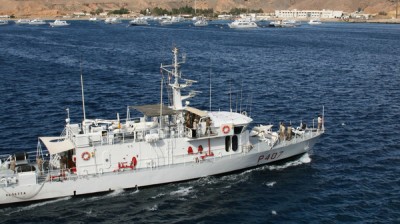 Gunmen in a fishing boat opened fire on an Egyptian naval launch which shot back, killing at least four of the attackers on Wednesday, security sources and state media said.

No one immediately claimed responsibility for the assault in the Mediterranean north of the port of Damietta, near the Suez Canal. The military has faced attacks from Islamist militants based in the Sinai Peninsula further east, and smugglers also operate in the area.

The military said in a statement it had destroyed four of the militants’ boats and captured 32 individuals in what it termed a “terrorist incident.” The statement said five navy forces were wounded and eight others were still unaccounted for.

State-run newspaper Al-Ahram reported soldiers were wounded and a number of the gunmen had been arrested.

Two militant attacks in the Sinai Peninsula last month killed 33 security personnel, prompting the army to declare a three-month state of emergency in the surrounding areas and clear a security barrier along the border with the Gaza Strip.

Security sources told Reuters the fire fight happened about 18 km (11 miles) north of the port of Damietta, 50 km west of the Suez Canal city of Port Said where dozens of commercial vessels pass each day.