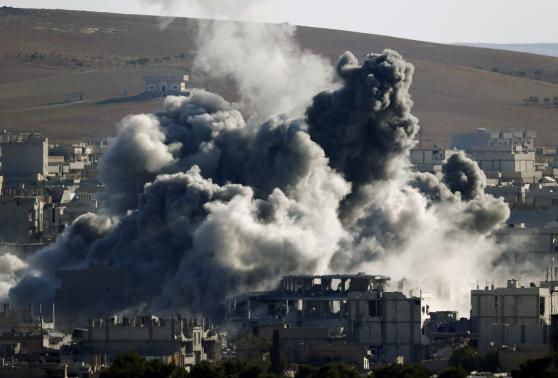 An explosion following an air strike is seen in central Kobani November 9, 2014. REUTERS/Yannis Behrakis
Share:
At least 21 people were killed and around 100 wounded overnight when Syrian government war planes bombed a town in northern Syria controlled by Islamic State militants, a group monitoring the war said on Sunday.

The attack came hours before a United Nations mediator met senior Syrian officials in Damascus to discuss ways to ease the war, which has entered its fourth year, killed around 200,000 people and since September drawn in the United States and allies in air strikes against the Sunni militant group Islamic State.

The government of President Bashar al-Assad has stepped up its campaign against Islamic State and other enemies in the weeks since U.S.-led strikes began.

Washington, which is also bombing the fighters in territory they control in Iraq, says it opposes both Islamic State and Assad’s government. In Syria it supports what it calls moderate rebel groups who are fighting against both in a complex, multi-sided civil war.

But some rebels complain that the U.S. air strikes help Assad by hurting his enemies. The government has not complained about the U.S. action and has concentrated its firepower on the western parts of the country while U.S. forces bomb the east.

Fighting between Assad’s government and rebels has intensified across northern Syria in recent days in areas close to the Turkish border in and around the northern city of Aleppo and in the Damascus countryside close to Lebanon.

One of the 21 killed was a child and the death count was expected to rise as some of the wounded were in a serious condition, said the Observatory, which gathers information from a variety of sources in Syria.

There was no immediate report on the latest strikes on Syrian state media. The Syrian army previously hit an area near al-Bab in September, saying it had “eliminated a number of terrorists” shortly after the U.S.-led strikes started.

At least four strikes by the U.S.-led coalition hit the predominantly Kurdish border town of Kobani on Sunday, according to a Reuters correspondent on the Turkish side of the border.

The town, known as Ayn al-Arab in Arabic, has been besieged by Islamic State fighters since September, becoming one of the highest-profile battlefields of the war.

Iraqi Kurdish fighters known as peshmerga, who have been drawn into the battle to back up their Syrian kinsmen, fired volleys of rockets towards Islamic State positions in villages around the town. Machinegun fire rang out through the centre of Kobani, where several mortars also landed.

After losing scores of men in the weeks-long assault, Islamic State has now called on dozens of its fighters in the northeast of Aleppo province to head west towards Kobani, the Observatory also said on Sunday.

They talked about de Mistura’s address to the U.N. Security Council last month in which he proposed an “action plan” of implementing some local ceasefires, SANA added.

A representative of de Mistura was not immediately available for comment. It was his second visit to Damascus since taking up his post in July. On his previous visit, he met with President Bashar al-Assad.

Some Western diplomats are concerned that de Mistura’s push for local ceasefires could be tricky. They say pro-government forces have used such agreements in the past to force insurgent-held areas to surrender and have rounded up men there.