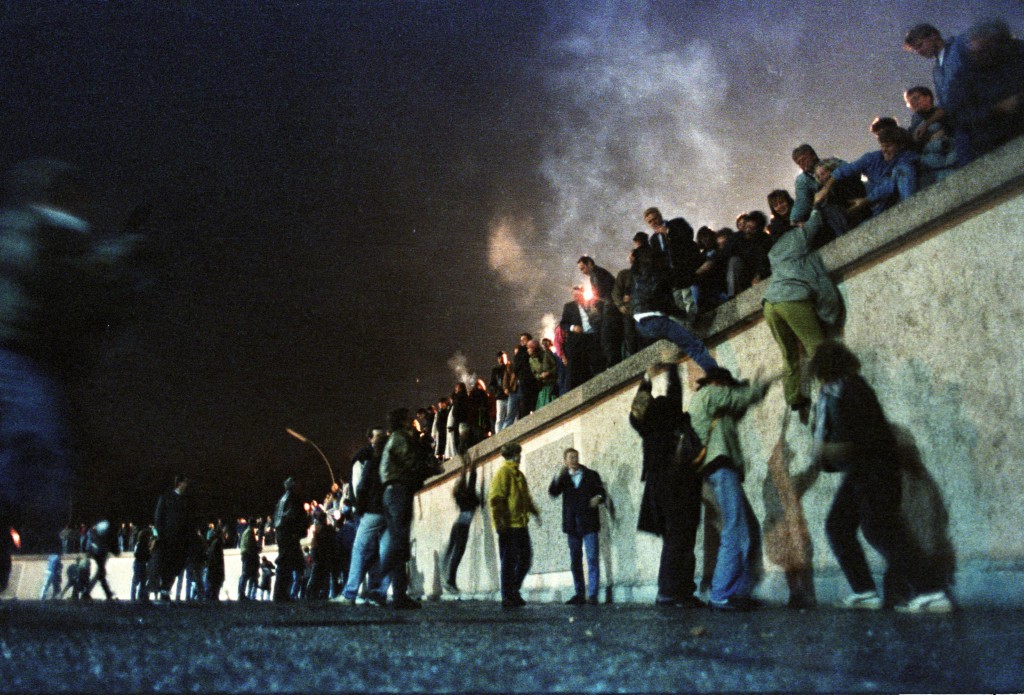 On Nov. 9, Germans will celebrate the 25th anniversary of one of the most beautiful moments in their troubled history: the day that ordinary people, with ordinary aspirations, brought down the Berlin Wall. Not a shot was fired, not a drop of blood was shed, and in less than a year, divided Germany was reunited, paving the way for the reunification of a continent cut in two by the Cold War.

The paradox of the Berlin Wall is that it fell for exactly the same reason that it was built. In 1961, communist East Germany erected the “anti-fascist protection wall” to stem the flow of its citizens leaving for a better life in the West. Twenty-eight years later, as the communist bloc started cracking and East Germans fled to West Germany via Hungary and Czechoslovakia, the regime in East Berlin felt it could only relieve building domestic pressure by opening the border.

After a series of oversights by a few officials – and the persistence of a few more citizens sick of their de facto imprisonment – a repressive system buttressed by “scientific communism” and the Soviet Union’s nuclear arsenal crumbled overnight. Germans are right to be proud of their peaceful revolution, and foreigners can easily share in its inspiration. Yet during this year’s celebrations, a measure of restraint would be in order, because for the first time since the fall of the Berlin Wall, the promise of 1989 – a free, united Europe – has come under attack.

Divided Berlin, once the starkest symbol of the Cold War, is blissfully oblivious to the past. Most European cities have more of their medieval fortifications left than Berlin has pieces of the hated wall. Once physically detached from Western Europe, the city is now its political and creative hub. Marginalized neighborhoods that used to abut the Berlin Wall have found themselves in the city center: the border crossing Checkpoint Charlie has turned into a kitschy tourist trap, and luxury condos are springing up in the former “death strip” where East German troops used to shoot to kill. West Berlin’s edgy counter-culture has shaped today’s mainstream.

The new normal is beguiling and comfortable. The old certainties of the Cold War seem quaint to a postmodern, skeptical generation of Europeans with no first-hand experience of living on a divided continent. The United States is no longer seen as the guarantor of Western democracy. On the contrary, after the unprovoked war in Iraq and revelations about the National Security Agency’s global reach, especially younger Germans see the United States more as a menace than a benefactor. It’s not a coincidence that Berlin has become a haven for latter-day American dissidents such as filmmaker Laura Poitras and WikiLeaks activist Jacob Appelbaum.

Germans’ ambivalence toward the United States is understandable. President George W. Bush ran roughshod over America’s closest allies in the lead-up to the Iraq War, and Barack Obama perpetuated the insult with his strategic “pivot” to East Asia. Obama, who happily used Berlin as the backdrop for a 2008 campaign speech, miffed Chancellor Angela Merkel when he skipped the party for the 20th anniversary of the fall of the Berlin Wall.
Both sides in the relationship have become lazy. Washington geostrategists write off Germany as too frail and timid to count on for the messy jobs in their never-ending war on terror, while Germans take their prosperity for granted, failing to acknowledge that they can only afford to be pacifists because the UnitedStates is worrying about their defense. If America can’t quite get over its superpower hubris, Germany has no problem playing the dwarf.

It has taken Russian President Vladimir Putin to refocus minds on both sides of the Atlantic. With his annexation of Crimea and intervention in eastern Ukraine, Putin bared to the world the scars from psychological wounds he sustained in 1989. The fall of the Berlin Wall didn’t just mean the reunification of a city, country, and continent – but the Kremlin’s loss of control over half of Europe.

Putin, who was working as a KGB agent in East Germany at the time, witnessed how people power brought down the system it was his duty to preserve. He personally warded off a crowd of East German activists from storming the KGB building in Dresden. When the bedraggled remains of the Red Army left East Germany after German unification in 1990, the retreating soldiers of the broken Soviet empire inspired pity, not fear.

Russians swallowed their pride – many blaming President Mikhail Gorbachev for the demise of the Soviet Union – and got on with the new world order as best they could. After Putin came to power in 2000, he tapped into his German experience to forge close relations to unified Germany with the intent of chipping away at the transatlantic relationship. When then-Chancellor Gerhard Schroeder openly opposed Bush’s unilateral attack on Iraq, Putin spotted an opportunity. Schroeder became a personal friend and one of the Kremlin’s strongest advocates in Europe. After leaving office in 2005, he began drawing a paycheck from a unit of Russian energy giant Gazprom.

Merkel, who grew up in East Germany, has been less positively inclined toward Putin. After the annexation of Crimea, she became the West’s main interlocutor with the Kremlin without shying away from taking a tough stance. Yet even as Russian involvement in Ukraine became deeper and deeper, a significant part of the German population was buying Putin’s argument that the West – the United States in particular – was to blame for the conflict. Distrust in America’s intentions has provided fertile ground for the wildest conspiracy theories.

The struggle for freedom that began in 1989 is not history – and it’s not over. Kiev’s Maidan protest last winter was a belated episode of the Velvet Revolution that swept eastern Europe 25 years ago: citizens standing up for their rights, including the one to rejoin the European family. Putin punished Ukrainians by dismembering their country not only because he saw in their protest a threat to his own power. It was late revenge for the world he lost in 1989.

Dmitry Medvedev, then Russia’s president, attended the anniversary of the fall of the Berlin Wall five years ago. Nobody is expecting Putin this year.