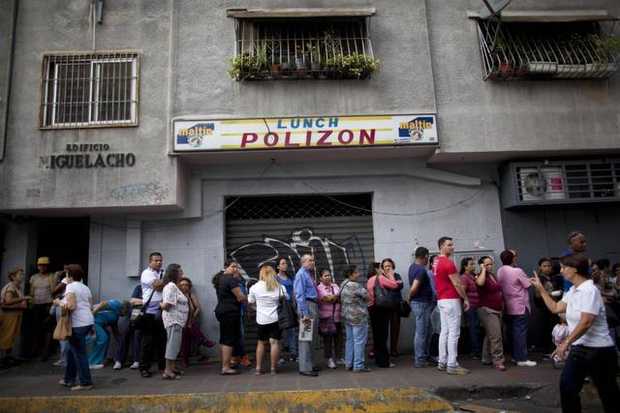 Venezuela is stepping up efforts to combat shortages and rising prices so families can have a merry Christmas complete with 12-cent sacks of sugar and 50-cent chickens.

President Nicolas Maduro announced Friday that he is deploying hundreds of inspectors to enforce the government’s price regulations, which set the cost of everything from milk to toothbrushes artificially low.

“Today we deploy, and in November and December you will see that we have guaranteed a happy Christmas for the people,” he said during televised remarks.

The move is part of expanded effort to combat chronic shortages, smuggling, and runaway inflation that are putting great stress on consumers in the socialist Latin American country. The new initiatives come as Maduro’s approval ratings have plunged into the low 30 percent range, and his party prepares for congressional elections next year.

Maduro recently announced that his administration had taken over warehouses where “bourgeois criminals” were hoarding food and medical supplies. He also increased the maximum prison sentence for smugglers to 14 years.

Officials say the state has arrested more than 1,000 smugglers since Venezuela began closing its border with Colombia each night.

The administration blames shortages on black-market vendors who buy groceries at government-regulated prices and illegally resell them for high profits and on an “economic war” it says is being waged by hostile, speculating companies. Critics say the problems are the result of excessive government intervention in the economy and smuggling that is tacitly endorsed by security forces.

The new inspection team will be responsible for verifying that prices remain below government-issued caps at supermarkets as well as at stores selling shoes, toys, appliances and hardware, among other goods. Maduro promised to be “relentless” in tracking down and punishing violators.

Caracas Chamber of Commerce head Victor Maldonado said the inspections will do little to right the distortions in the oil country’s economy and ensure happy holidays.

“There is a huge crisis of confidence in Venezuela,” he said. The commercial sector “doesn’t trust the government’s economic policies or its ability to resolve problems. Experience tells us that with measures like these, you’re left with empty shelves, little to no supplies, and closed businesses.”