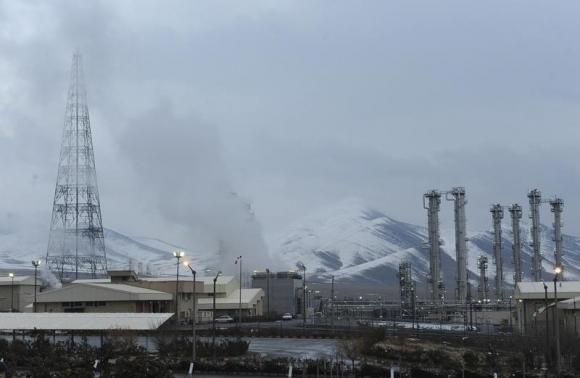 A general view of the Arak heavy-water project, 190 km (120 miles) southwest of Tehran January 15, 2011. REUTERS/ISNA/Hamid Forootan
Share:
Iran has foiled an attempt to sabotage tanks used for transporting heavy water, which is needed to run some nuclear reactors, and blames a “foreign country” for the incident, a senior official was quoted by local media as saying.

The Islamic Republic is at odds with the West over suspicions it is covertly using its declared civilian atomic energy program to develop a nuclear arms capability. It denies this and has repeatedly accused certain Western states of trying to cripple the program through acts of sabotage.

Asghar Zarean, deputy chief in charge of nuclear protection and security at Iran’s Atomic Energy Organization, was quoted by the Tehran newspaper Arman as saying the bid to damage tanks at the Arak heavy-water production plant occurred two weeks ago.

“There were attempts to cause disruption in storage tanks due to carry heavy water. But these attempts were discovered and foiled before the tanks were filled with heavy water at Arak,” Zarean was quoted as saying.

“A foreign country was behind the attempt,” he said, without elaborating. Iranian officials could not be immediately reached for further comment.

The Arak plant has been producing heavy water to operate a planned 40-megawatt research reactor nearby that Iran says is intended to make isotopes for cancer and other medical treatments.

But in June it said that it was redesigning the Arak reactor to sharply cut its potential output of plutonium, a nuclear bomb material, a gesture apparently meant to address a thorny issue in negotiations with six world powers.

Iran also stopped installing major components in the Arak reactor as part of an interim deal struck with the powers in November 2013, and which expires next month, to curb some sensitive nuclear activity in exchange for limited relief from sanctions. Iran also agreed not to transfer heavy water to the reactor site under this temporary pact.

World powers are negotiating to strike a permanent settlement with Iran by a Nov. 24 deadline under which Tehran would curb its nuclear fuel enrichment work to ensure it cannot be applied to bomb-making in exchange for a phased removal of international sanctions that have hobbled its oil-based economy.

The Islamic Republic has repeatedly complained of alleged covert U.S. and Israeli attempts to cripple its nuclear program.

Iran’s intelligence minister said on Oct. 21 that several people seeking to engage in nuclear espionage “for foreigners” had been arrested in the southern province of Bushehr, where Iran’s only nuclear power station is located.

In 2010, Iran’s uranium enrichment facilities were temporarily impaired by a virus known as Stuxnet, which was widely believed to have been developed by the United States and Israel, although no government took responsibility for it.

In March of this year, pumps at the Arak reactor were subjected to a failed sabotage attempt, Iranian media quoted a senior official as saying at the time.