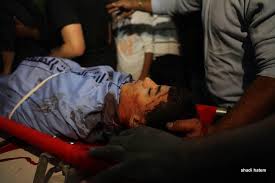 Israeli forces killed an American youth during West Bank clashes on Friday, U.S. officials confirmed. “The United States expresses its deepest condolences to the family of a U.S. citizen minor who was killed by the Israeli Defense Forces during clashes in Silwad,” according to a State Department statement. A relative identified the minor as 14-year-old Orwah Hammad, and said that his father Abed Al- Wahhab was traveling to the region to attend his son’s funeral on Sunday. Reuters reported that he was shot in the head in Silwad, north of the Palestinian seat of government in Ramallah.

A member of the Israeli Defense Forces “identified a person throwing a Molotov cocktail and fired at at him. The force identified a hit and the IDF is now investigating the incident,” an Israeli army spokesman told NBC News. Tensions have bubbled over in the area in recent days as more Jews accompanied by police visit the holy site known to them as Temple Mount and to Muslims as Noble Sanctuary during the Sukkot holiday. Palestinians worry that the visits, along with the moving-in of dozens of Israeli settlers to homes in an Arab district in the shadow of the holy compound, will deepen Israel’s claim to the city as its indivisible capital.