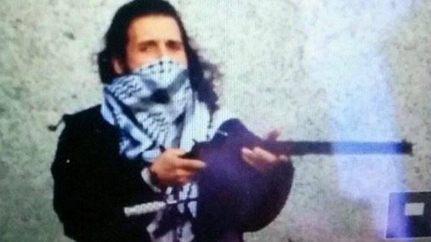 MICHAEL ZEHAF-BIBEAU, PICTURED IN THIS IMAGE TWEETED FROM AN ISIS ACCOUNT, HAS BEEN IDENTIFIED AS THE SHOOTER OF A SOLDIER STANDING GUARD AT THE NATIONAL WAR MEMORIAL IN OTTAWA ON WEDNESDAY OCT. 22, 2014
Share:
The British police arrest four men accused of plotting a bombing on the scale of the Mumbai hotel attack six years ago. The Australian authorities arrest a ring of 12 accused of plotting daring murders, including a public beheading.

In Canada, a gunman assaults the Parliament building and kills a soldier guarding a war memorial, and a motorist strikes two soldiers, killing one — in both cases, perpetrators with tenuous links to Islamist extremism.

And in New York City, a man wielding a hatchet attacks four police officers in Queens, slashing one in the head and another in the arm.

The series of episodes over just the last four weeks is raising new fears about the capacity of the extremists who call themselves the Islamic State to catalyze so-called lone-wolf attacks, conceived and carried out by individuals or small groups around the Western world who may have little or no connection to the Islamic State.There is no evidence that any of the episodes were carried out by any centrally organized terror network. But in each case the violence was plotted or executed by individuals moved by the messages of Islamist extremists, and all took place in the one month since the Islamic State began exhorting Muslims in the West to commit such acts.

“The Al Qaeda ‘fan boys’ never did this, definitely not in so coordinated a fashion in so close a time,” said William McCants, a scholar of Islamist militancy at the Brookings Institution.

Decades of Qaeda calls for Muslims in the West to instigate their own attacks mostly “fell on deaf ears,” but “the ISIS guys are just really energized,” Mr. McCants said, using an alternate name for the group, the Islamic State.

Analysts say the far-flung plots and attacks mark a change in the nature of the group and its threat to the West. Unlike Al Qaeda or other jihadist groups, the Islamic State had previously focused on capturing territory across Syria and Iraq and on sectarian killings in its own region — not on a global war against the West. But since the American-led bombing campaign against the group began to hit its Syrian stronghold, the Islamic State has sought to retaliate by urging its sympathizers throughout the West to strike back on its behalf.

The group’s social media messages to Muslims living in the West have changed sharply, from “come join the attack” to “we are being attacked and what are you doing? You are just sitting there!” said Mokhtar Awad, a researcher at the liberal Center for American Progress, based in Washington.

“They are trying to shame sympathizers,” he said on a visit to Cairo. “  ’If you can’t join us over here, at least do what you can over there.′  ”

Now, the swift responses in Canada and elsewhere suggest that its unique combination of spectacular violence, media-savvy messaging and sheer braggadocio may enable the Islamic State to bring about lone-wolf attacks like the assault on the Canadian Parliament even without building an international network or organization. If it inspires more, they would pose a diffuse and pervasive threat that Al Qaeda could only dream of.

The Canadian attacks have already cast a different light on the proliferation of measures by countries around the world to stop their citizens from traveling to Syria and Iraq to join the fight for fear that they might return to pose threats at home.

The gunman who attacked Parliament, Michael Zehaf-Bibeau, a mentally unstable Muslim convert with a history of drug use, had told his mother that he intended to join the war in Syria, the police said. But his deadly attack in Ottawa shows that he was already dangerous, so blocking his travel would have merely kept the existing threat close to home.

In some ways, the Islamic State is merely elaborating a “doctrine of defensive jihad and the privatization of violence that Al Qaeda has been advocating for nearly two decades,” said Bernard Haykel, a professor at Princeton University who studies militant Islam. “There is nothing specific about the Islamic State that inspires acts of vigilante violence. These lone-wolf attacks were happening before,” Professor Haykel wrote in an email message, noting the case of Maj. Nidal Malik Hassan’s massacre at Fort Hood in Texas in 2009.

The Islamic State, though, has little support from the militant thinkers and ideologues who have helped recruit for Al Qaeda’s war on the West. Nearly all dispute the Islamic State’s claim that its caliphate should rule all Muslims as well as the priority it places on killing Muslim dissenters.

Instead of relying on religious or political arguments, the Islamic State has capitalized on the inspirational power of its violence and territorial gains.

“The traditional sheikhs of Al Qaeda can talk, talk, talk, but the consumer does not have to listen,” said Mr. Awad of the Center for American Progress. But the Islamic State is exploiting the propaganda of actions, not words, he said, and it is proving more effective.

Sympathizers across the Muslim world still identify the Islamic State primarily with its emphasis on prioritizing regional, intra-Arab struggle. In recent conversations with young supporters in Tunis — capital of the country that has sent many young men to join the Islamic State — many said its only difference from Al Qaeda was over the tactical question of whether to take on the West now or later, after building what the terrorist group considers a pure caliphate.

That changed on Sept. 21, as the American-led bombing campaign escalated. In an audio statement over the Internet, the militant group’s official spokesman, Abu Muhammad al-Adnani, urged Muslims living in the West to retaliate against their countries for joining the strikes.

“If you can kill a disbelieving American or European — especially the spiteful and filthy French — or an Australian, or a Canadian, or any other disbeliever from the disbelievers waging war, including the citizens of the countries that entered into a coalition against the Islamic State, then rely upon Allah, and kill him in any manner or way however it may be,” Mr. Adnani urged, adding, “Kill the disbeliever whether he is civilian or military” because “both of them are disbelievers.”

He warned Americans and Europeans that they would suffer.

Analysts said they had never heard anything like it before from the group. “It was the first time that they really crossed the Rubicon into attacks that are out of the area,” whether in terms of inspiring or organizing them, said Brian Fishman, a researcher on counterterrorism at the New America Foundation. “It was pretty dramatic.”

In the aftermath of the Western attacks, he said, the Islamic State wanted to put pressure on its foes just as any other nation might seek to deter or punish aggression against it. “Inciting random individuals to do lone-wolf attacks targeting civilians or off-duty military folk is clearly terrorism,” Mr. Fishman said, “but they are thinking about this as a strategic response to pressure we are applying on them in the Middle East.”

Many predicted just such a backlash of terrorist violence against the West after the airstrikes, Mr. Fishman said. But he argued that in any case it was just a matter of time before the militant group turned its attacks in that direction.

“There is just so much momentum in the jihadi community to take the violence to the West,” he said.