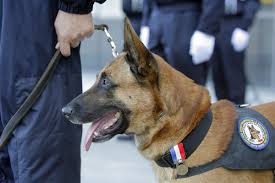 An intruder jumped the fence at the White House on Wednesday evening and was caught with assistance from a dog, a Secret Service spokesman said.

The jumper breached the north fence line and was “apprehended by one of the K-9 units” around 7:22 p.m. Eastern time, spokesman Ed Donovan told the Los Angeles Times. Donovan said the intruder reached the lawn and was under arrest. He would not say how deep into the White House grounds the person got or provide any other details.

The intruder was taken to a hospital with injuries, an Obama administration official told The Times.

The incident comes a month after an Iraq war veteran carrying a pocketknife jumped the fence and ran across the North Lawn, through an unlocked White House door and into multiple rooms before being caught.

Omar Gonzalez, 42, was arrested after that security breach. He faces six counts, including two federal charges of assaulting officers. This week, a preliminary evaluation found him “presently not competent” to stand trial.

The Sept. 19 breach was part of a string of embarrassing incidents for the Secret Service that led to the resignation of the agency’s director, Julia A. Pierson.

Donovan would not tell The Times whether any changes to Secret Service protocols came into play when responding to Wednesday evening’s fence jumper.