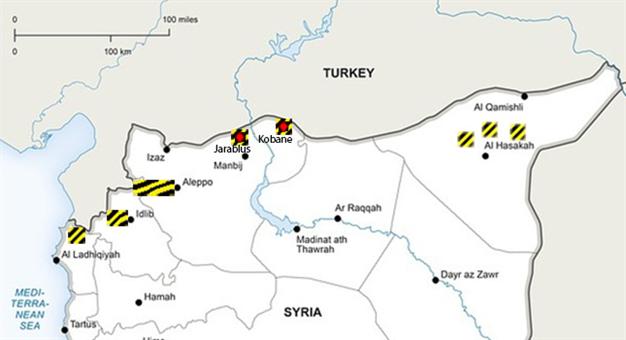 Turkish Prime Minister Ahmet Davutoğlu has clarified the locations of possible internationally sanctioned safe zones near Syria’s border with Turkey, outlining a line stretching from the Mediterranean to Iraq.

“The buffer zone we mean here is not a military definition, but a humanitarian safe zone under military protection,” Davutoğlu said in an interview with Al-Jazeera Arabic on Oct. 15.

After noting that safe zones should protect “areas with populations over a certain density,” the Turkish PM mentioned the need to connect the Turkish border with northern Latakia, “certain areas in al-Hasakah,” as well as Jarabulus, Ayn-al Arab (Kobane), Tel Abyad, Idlib and Afrin to protect Syria’s Arabs, Kurds and Turkmens.

Davutoğlu stressed that the depth of the safe zone could change according to varying humanitarian situations in these areas, but he reiterated that Turkey would not take the risk of intervention alone.

“United Nations Security Council can’t take any decisions due to certain vetoes. Then, the international coalition that was created for an intervention in Syria and the coalition of the willing can take certain decisions and provide air protection [for the safe zone],” he said, recalling the internationally sanctioned no-fly zone in Saddam Hussein-era Iraq.

The Turkish government has faced international and domestic pressure as Islamic State of Iraq and the Levant (ISIL) militants have advanced toward Kobane, but Davutoğlu countered the criticism by slamming his critics.

“The fall of Ayn-al Arab could really sadden us, and we will do everything to stop it, but where were they when Raqqa [the stronghold of ISIL] fell? Where where they when Jarabulus, Mosul fell?” he said.

As recently as Oct. 15, earlier on the same day when Davutoğlu’s clarification came, Syria’s Foreign Ministry voiced objection to Turkey’s desire for “a buffer zone.”

Damascus did not accept the proposals for “a buffer zone and would take in consultation with its friends all the necessary measures to preserve its national sovereignty and territorial integrity,” Syrian state news agency SANA quoted a statement by the Syrian Foreign Ministry.