Anti-Semitism has returned to Europe 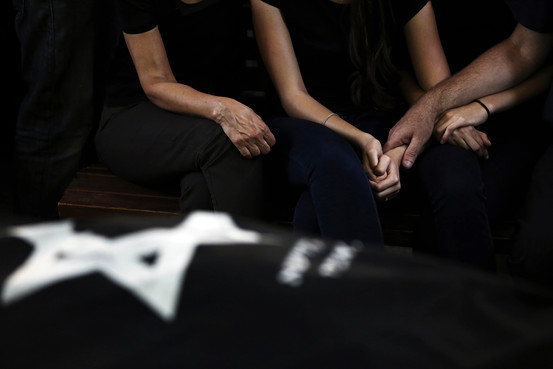 Family members held hands during the funeral of Emanuel and Miriam Riva, an Israeli couple shot in an attack at the Brussels Jewish Museum. They were buried at Kiryat Shaul cemetery in Tel Aviv, May 27, 2014. Reuters
Share:
By JONATHAN SACKS

This year, Europe’s Jews enter Yom Kippur, the holiest day of the Jewish year, with a degree of apprehension I have not known in my lifetime. Anti-Semitism has returned to Europe within living memory of the Holocaust. Never again has become ever again.

In France, worshipers in a synagogue were surrounded by a howling mob claiming to protest Israeli policy. In Brussels, four people were murdered in the Jewish museum, and a synagogue was firebombed. In London, a major supermarket said that it felt forced to remove kosher food from its shelves for fear that it would incite a riot. A London theater refused to stage a Jewish film festival because the event had received a small grant from the Israeli embassy.

More than once during the summer, I heard well-established British Jews saying, “For the first time in my life, I feel afraid.” Twenty years ago, launching a program to strengthen Jewish continuity across the generations, I published a book titled, “Will We Have Jewish Grandchildren?” Today, Jews are beginning to ask, “Will we have English grandchildren?”

And Jews are leaving. A survey in 2013 by the European Union Agency for Fundamental Rights showed that almost a third of Europe’s Jews have considered emigrating because of anti-Semitism, with numbers as high as 46% in France and 48% in Hungary. Quietly, many Jews are asking whether they have a future in Europe.

It would be wrong to exaggerate. Europe today isn’t Germany in the 1930s. Hatred of the Jews isn’t being incited or even condoned by European governments. Many political leaders, notably Angela Merkel in Germany and David Cameron in Britain, have been forthright in their denunciation.

Nor are such prejudices distributed throughout the British population. Britain has lower recorded levels of anti-Jewish sentiment than the U.S. But what is happening is immensely significant nonetheless. Historically, as the British Tory MP Michael Gove points out, anti-Semitism has been the early warning signal of a society in danger. That is why the new anti-Semitism needs to be understood—and not only by Jews.

Anti-Semitism was always only obliquely about Jews. They were its victims but not its cause. The politics of hate that begins with Jews never ends with Jews. It wasn’t Jews alone who suffered under Hitler and Stalin. It is hardly Jews alone who are suffering today under their successors, the radical Islamists of Hamas, Hezbollah, al Qaeda, Boko Haram, Islamic State and their fellow travelers in a seemingly endless list of new mutations.

The assault on Israel and Jews world-wide is part of a larger pattern that includes attacks on Christians and other minority faiths in the Middle East, sub-Saharan Africa and parts of Asia—a religious equivalent of ethnic cleansing. Ultimately, this campaign amounts to an attack on Western democratic freedoms as a whole. If not halted now, it will be Europe itself that will be pushed back toward the Dark Ages.

Some of what we are seeing in Europe is the old anti-Semitism of the far right and the radical left, which never went away and merely lay dormant during the years when attacks on Jews were considered unacceptable in polite society. That taboo is now well and truly broken.

But the driving thrust of the assault on Jews is new. Today’s anti-Semitism differs from the old in three ways. First, its pretext. In the Middle Ages, Jews were hated for their religion. In the 19th and 20th centuries, they were hated for their race. Today, they are hated for their nation state. Israel, now 66 years old, still finds itself the only country among the 193 in the United Nations whose right to exist is routinely challenged and in many quarters denied.

This isn’t to say that all criticism of Israel is anti-Semitism. Manifestly it is not. Israel itself is one of the most self-critical nations in the world, and criticism of its policies is a legitimate part of democratic debate. But the supporters of Hamas aren’t interested in this policy or that, these borders or those. They are committed as a matter of principle, stated in their charter, to the complete destruction and elimination of the Jewish state.

There are 102 nations in the world where Christians predominate, and there are 56 Islamic states. But a single Jewish state is deemed one too many. And the targets of terror in Europe are all too often not Israeli government offices but synagogues, Jewish schools and museums—places not of Israeli policy-making but of ordinary Jewish life.

But the anti-Semitism that has taken hold in the Middle East isn’t endemic to Islam. Coptic and Maronite Christians introduced the blood libel—the slander that Jews use the blood of gentiles in religious rituals—into Egypt and Syria in the 19th century. Nazi Germany, via its ally, the Grand Mufti of Jerusalem, added to this mix the notorious conspiracy tract “The Protocols of the Elders of Zion.”

These two myths entered Islam from the outside. Now Islamist radicals have brought them back to Europe. Whenever you hear that “Jews control the media” or “Israel targets Palestinian children,” you are hearing “The Protocols” and the blood libel yet again.

Third, the legitimation of anti-Semitism has changed. Hatred, when taken into the public domain, is singularly difficult to justify, which is why anti-Semites have always sought vindication from the highest source of authority in the culture. In the Middle Ages, it was religion. In 19th-century Europe, it was science. German anti-Semitism was based on the so-called “scientific study of race” and social Darwinism, the doctrine that in human history, as in nature, the strong survive by eliminating the weak.

In the era since World War II, the great authority has been the Enlightenment ideal of human rights. That is why the new wave of anti-Semitism was launched at the U.N. Conference against Racism at Durban, South Africa, in the summer of 2001. There Israel was accused of the five cardinal sins against human rights: racism, apartheid, crimes against humanity, ethnic cleansing and attempted genocide.

Human rights matter, and they matter regardless of the victim or the perpetrator. It is the sheer disproportion of the accusations against Israel that makes Jews feel that humanitarian concern isn’t the prime motive in these cases: More than half of all resolutions adopted by the U.N. Human Rights Council since 2006 (when the Council was established) in criticism of a particular country have been directed at Israel. In 2013, the U.N. General Assembly adopted a total of 21 resolutions singling out Israel for censure, according to U.N. Watch, and only four resolutions to protest the actions of the rest of the world’s states.

Anti-Semitism has always been, historically, the inability to make space for differences among people, which is the essential foundation of a free society. That is why the politics of hate now assaults Christians, Bahai, Yazidis and many others, including Muslims on the wrong side of the Sunni/Shia divide, as well as Jews. To fight it, we must stand together, people of all faiths and of none. The future of freedom is at stake, and it will be the defining battle of the 21st century.

*Lord Sacks is the emeritus chief rabbi of the United Hebrew Congregations of the British Commonwealth. He currently teaches at New York University, Yeshiva University and King’s College London.