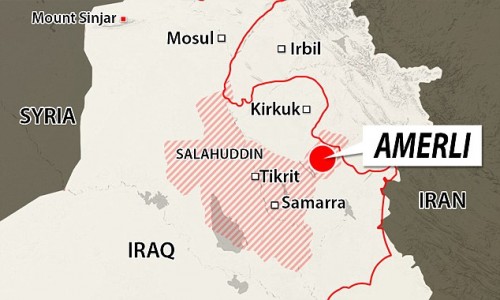 With U.S. warplanes opening a new front against Islamic State extremists, Iraqi forces and Shiite Muslim militiamen on Sunday broke the militant group’s nearly three-month siege of the northern town of Amerli as beleaguered residents greeted them with cheers.

Iraqi soldiers entered the farming town about 100 miles north of Baghdad a day after launching a ground operation aimed at freeing the 15,000 mainly Shiite Turkmen residents, who had been encircled by the Sunni Arab militants since June.

Residents said the soldiers brought gasoline and doctors to help alleviate what human rights activists described as one of Iraq’s gravest humanitarian crises.

Amerli had been surrounded, its electricity cut off and supplies of food, potable water and essential medicines running low. Residents had taken up arms to defend their town against the Sunni militants, who view Shiites as apostates and had laid siege to several nearby Turkmen villages as they marched across northern Iraq in recent months.

“A lot of soldiers are here now, so finally we feel relieved,” said Sami Beiram, a resident and volunteer fighter interviewed by phone from Amerli.

“But we still need food, we need water, we need electricity, we need all these things.”The Pentagon said late Saturday that it carried out airstrikes in the area and dropped humanitarian aid by plane into Amerli at the request of the Iraqi government, marking the first time that U.S. forces had struck so far to the east since launching the air campaign in mid-August.

The operation came after days of mounting pressure for the U.S. military to help Amerli, which the United Nations envoy to Iraq, Nikolay Mladenov, warned was facing a potential “massacre.” Some activists accused the Obama administration of having a double standard after launching airstrikes and delivering aid to trapped Yazidis, a minority sect whose members were being targeted by Islamic State forces elsewhere in northern Iraq.

Pentagon spokesman Rear Adm. John Kirby said the airdrop in Amerli was carried out jointly with Australia, France and Britain, and that U.S. warplanes “conducted coordinated airstrikes against nearby [Islamic State] terrorists in order to support this humanitarian assistance operation.”

Officials cast the mission in humanitarian terms, but the operation also placed the United States on the same side of the battlefield as controversial Shiite militias that have allied with the Iraqi government against the Islamic State. They include the feared armed wing of the Badr Organization, a Shiite political party that allegedly ran death squads blamed for killing untold numbers of Sunnis during Iraq’s sectarian civil war. 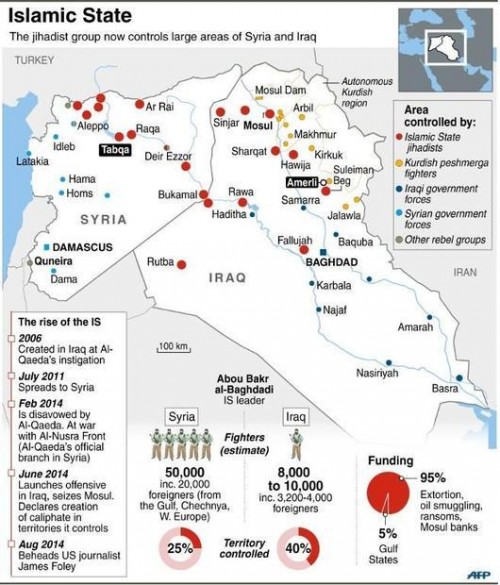 The Badr militiamen were among the first to enter Amerli with the Iraqi forces on Sunday, residents said, probably boosting the group’s standing among Shiites. The party’s leader, Hadi Amiri, is a close ally of Iran who is angling for a senior position in Iraq’s new government.

Advocates cared little about any of that on Sunday.

“It doesn’t matter who frees the people of Amerli as long as the siege is broken,” said Rushdie Hussain Ali, an officer with the Iraqi Turkmen Front political organization in the northern city of Kirkuk. “The United States did the right thing on humanitarian grounds.”

The operation was the latest boost to Iraqi government forces, who have rolled up a string of victories after ceding large chunks of territory to the extremists since June. Last week, Kurdish Iraqi forces routed Islamic State militants from the northern district of Zumar, extending the government’s control west of the strategic Mosul dam, which the Kurds retook in mid-August with U.S. air support.

Fighting continued into Sunday evening in villages close to Amerli where militants had been holed up, residents said. Iraqi forces were reportedly coming under fire from snipers posted in the hamlet of Suleiman Beg, just outside Amerli.

About 500 Iraqi soldiers and volunteer fighters were inside Amerli while a large contingent was posted on the road north to the nearby town of Tuz Khurmatu in an apparent effort to create a humanitarian corridor to allow some residents to flee.

“There are some fights, but mainly everything is good now,” said Ali Bayati, an Amerli resident who leads the Turkmen Saving Foundation, a local human rights organization. “The siege is relieved and all Amerli people are happy.”