Lebanon accused of discrimination over denying entry to Palestinian refugees 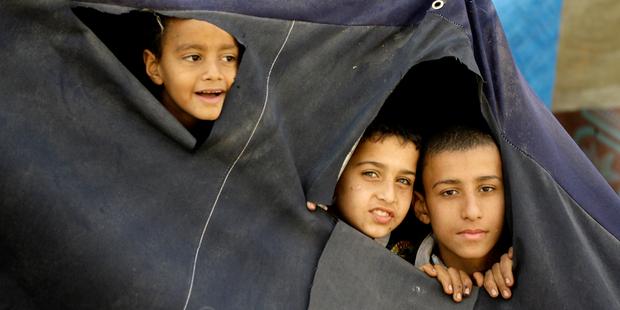 Young Palestinian refugees from Syria in Lebanon, where many have been denied entry like in the case of Jordan and Turkey .© MAHMOUD ZAYYAT/AFP/Getty Images
Share:
Lebanon is acting in a “blatantly discriminatory” manner by denying access to Palestinians fleeing the conflict in neighboring Syria, Amnesty International said in a report on Tuesday.

The watchdog said Lebanon has imposed increasingly onerous entry requirements at the border with Syria and that there was evidence it is trying to prevent Palestinian refugees from entering via Beirut airport.

Amnesty acknowledged that hosting the refugees put Lebanon under “immense strain” and criticized the international community for failing to provide more support.

But, it said, there was “no justification” for the different treatment of Palestinians from Syria, who also represent a small number of the total population that has fled the Syrian conflict.

“The Lebanese government’s policies and practices towards Palestinian refugees from Syria have led to a range of serious human rights violations,” said Amnesty.

“The policies—which treat Palestinian refugees from Syria differently to other refugees—are also blatantly discriminatory,” it added.

Lebanon is hosting more than one million refugees from Syria, or about a quarter of its population.

The group said Palestinians seeking to cross the border from Syria were required to meet one of several criteria that were “extremely difficult and costly.”

And the report documented instances in which Palestinians said they met the criteria laid out, including a residency permit and proof of relatives living legally in Lebanon, but were still denied entry.

In one instance, a woman who had returned to Syria to give birth, was denied the right to return to her family staying in Lebanon.

In another, the parents of a 12-year-old returned to Syria to renew their identity documents, leaving their son in Lebanon with his uncle, but were subsequently denied reentry.

And, the group said, a document leaked from Beirut’s airport advises all airlines to avoid carrying any Palestinian passengers from Syria, regardless of the documents they have.

It threatens airlines with a fine and the cost of deporting passengers if they fail to comply.

“The policy set out in this document constitutes a clear breach of international law,” Amnesty said.

Lebanon’s government has denied there is any blanket decision preventing the entry of Palestinians from Syria.

Amnesty said it received no response from the government to its queries about the letter and incidences of denied entry.

There were approximately 500,000 Palestinians in Syria before the conflict, with refugee camps including Yarmuk in Damascus directly afflicted by the fighting.