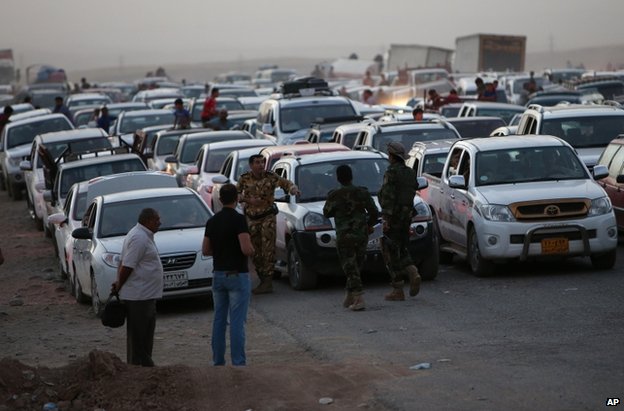 Fleeing Iraqis near the Kurdish city of Irbil
Share:
Prime Minister Nouri Maliki of Iraq has told the BBC he supports an air strike on Islamist militants at a border crossing between Iraq and Syria.

Military and rebel sources say the strike took place inside Iraq, at the Qaim crossing, although Mr Maliki said it was carried out on the Syrian side.

Mr Maliki also said the militants’ advance could have been avoided if US jets had been delivered more quickly.

Isis and its Sunni Muslim allies seized large parts of Iraq this month.

Iraq has been receiving support from Iran, with whom its Shia Muslim leaders have close links.

Speaking to the BBC’s Arabic service in his first interview for an international broadcaster since the crisis started, Mr Maliki said that Iraq had bought 36 American jet fighters, but that the process had been “slow and very long-winded”.

“I’ll be frank and say that we were deluded when we signed the contract. We should have sought to buy other jet fighters like British, French and Russian to secure the air cover for our forces; if we had air cover we would have averted what had happened,” he went on.

He said Iraq was acquiring “second-hand jet fighters from Russia that should arrive in Iraq in two or three days”.

“God willing, within one week this force will be effective and will destroy the terrorists’ dens,” he said.

The Syrian air strikes show how the conflicts in Syria and Iraq are merging together, with Isis as a common factor. Once-rival fighters on the Syrian side of the border at Qaim have now pledged allegiance to Isis, giving it control of both sides.

If US drones are not yet involved, they soon could be, illustrating how the threat posed by Isis is creating a convergence of interests between players who so far have been adversaries.

That goes for Iran, too, which is deeply concerned about the sudden upheavals in Iraq. It has reinforced its positions along its own western border, where guards have been killed in an attack. There are reports that Iran has been heavily shelling border areas in the Kurdish mountains, where an Iranian Kurdish opposition group called Pejak has bases.

line
The US, which also backs the government, has stressed that the militants can only be defeated by Iraq’s own forces.

Mr Maliki is seeking to form a new government but has rejected calls to create an emergency coalition which would include all religious and ethnic groups.

“As a friend of Iraq, the UK believes the urgent priority must be to form an inclusive government that can command the support of all Iraqi people and work to stop [Isis] in its tracks,” he said.

Meanwhile, the Iraqi air force is reported to have launched an assault in

Mr Maliki told the BBC: “Yes, Syrian jets did strike Qaim inside the Syrian side of the border.

“There was no co-ordination involved. But we welcome this action. We actually welcome any Syrian strike against Isis… But we didn’t make any request to Syria. They carry out their strikes and we carry out ours and the final winners are our two countries.”

Unnamed US and Iraqi military officials told the Associated Press earlier that Syrian warplanes had bombed militants’ positions inside Iraq on Tuesday.

A Pentagon source told BBC News: “We are aware of the reports that the Syrian government has taken strikes against targets in Iraq. We have no reason to dispute these reports.”

Militant sources have been reporting for two days that Syrian jets hit the Iraqi side of Qaim, and also Rutba which is further inside Iraq.

The militants say 70 people were killed in the first attack and 20 in the second.

Mr Maliki also said that Iraq had bought a number of used Sukhoi fighter jets from Russia and Belarus.

He said the aircraft could be flying missions in Iraq “within a few days”.

The US, he added, kept delaying the sale of F-16 jets.

Russian President Vladimir Putin discussed the crisis with Mr Maliki by phone last Friday, the Kremlin reported on its website at the time.

Mr Putin confirmed his “full support” for the government’s efforts to rid Iraqi territory of “terrorists”, it said, without giving details.

Mr Maliki said on Wednesday that forming a broad emergency government would go against the results of April’s parliamentary elections, which were won by his alliance of Shia parties.

Reports say a unit of al-Qaeda’s Syrian affiliate, the Nusra Front, pledged allegiance to Isis in the Syrian town of Albu Kamal, near the Iraqi border.

The Nusra Front, along with other rebel groups, has been fighting in Syria against Isis, which it sees as harming its cause with its brutality and extremism.

Also on Thursday, the leader of Iraqi Kurdistan visited the northern city of Kirkuk for the first time since it was seized by Kurdish forces earlier this month.

It fell into the hands of Kurdish fighters when Iraqi troops fled in the face of the Islamist advance.
BBC