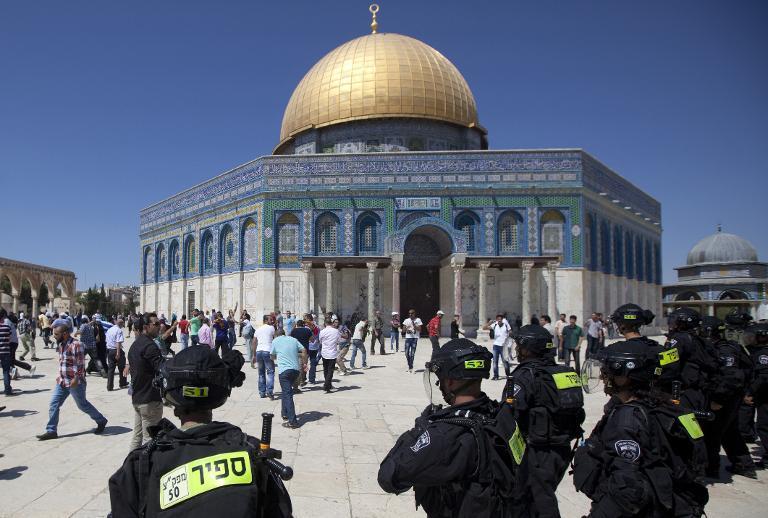 Police spokesman Micky Rosenfeld said the violence erupted when police opened one of the walled compound’s gates to non-Muslim visitors.

“Stones and a number of Molotov cocktails were thrown at police,” he said.

“Police responded by using stun grenades and entered the Temple Mount area,” he added, using the Jewish term for the site where tradition says the biblical Jewish temples once stood.

Members of the Palestinian Islamist movement Hamas were among the protesters at the compound.

“Five people suspected of being involved in the clashes were arrested and there will be other arrests,” Rosenfeld said.

The temple site is revered as Judaism’s holiest place. The compound also houses the Dome of the Rock and the Al-Aqsa mosque, the third holiest site in Islam.

Although non-Muslim visitors are permitted, Jews are not allowed to pray at the site.

Rosenfeld could not say if Jews were among those seeking to visit the site on Sunday.

“What I have seen today reflects the nature of the Israeli plans to take over the city by every method possible,” he added.

“Jerusalem should be the example to the rest of the world, an open city to all.”

Shaath also said “only a limited number of Palestinian Christians” were able to join Palm Sunday celebrations in Jerusalem “mainly due to (a) lack of permits.”

Christians mark Palm Sunday with a procession through Jerusalem in memory of Jesus’s triumphal entry into the city a week before he was crucified.