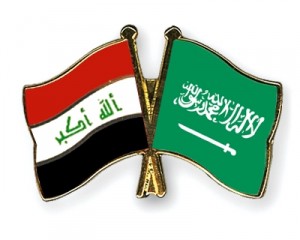 Maliki’s remarks to France 24 television late on Saturday appeared to play to Iraqi fears of meddling by Sunni Arab states as he tries to burnish his image as a defender of Shi’ite-majority Iraq before elections next month.

Iraqi forces have been fighting insurgents of the al Qaeda-inspired Islamic State of Iraq and the Levant (ISIL) in Anbar’s two main cities since January 1. ISIL overran Falluja and parts of Ramadi after a tribal revolt provoked by the arrest of a Sunni lawmaker and the clearing of an anti-government protest camp.

An official source quoted by the state Saudi Press Agency (SPA) expressed the kingdom’s “disapproval and surprise at the Iraqi prime minister’s hostile and irresponsible comments”.

“Nuri al-Maliki, before anyone else, knows very well the kingdom’s clear and unequivocal position against terrorism in all its forms,” the source said.

Instead of blaming others, the source said, Maliki should adopt policies that would end the violence in Iraq.

Qatar has not commented on Maliki’s remarks so far.

Violence in Iraq has worsened in the past year, with ISIL launching a devastating bombing campaign in mid-2013.

More than 700 people died in violence in February, not including nearly 300 reported deaths in Anbar. Last year was the deadliest since 2008 with nearly 8,000 civilians killed.

“It is clear that the purpose of these remarks is to try and twist the facts and place the blame on others to cover up the Iraqi prime minister’s shortcomings internally that have put Iraq at the service of regional factions who have stoked the fire of sectarian strife,” the Saudi source told SPA.

The source did not identify the “regional factions” but Saudi Arabia has previously accused its regional arch-rival Iran of stoking sectarian tensions in Iraq and elsewhere.

Maliki has long had chilly ties with the Gulf states, which view him as too close to Shi’ite Iran, suspecting them of funding Sunni militants fighting his Shi’ite-led government.