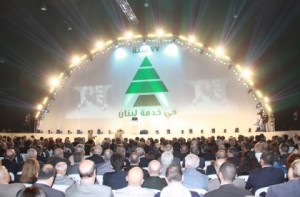 The Phalange Party announced in a statement its rejection of dealing with the presidency as if it were a party in the country, saying that those that refuse to place the resistance under the command of the state reject the concept of the state.

Phalange Party Central Committee Coordinator MP Sami Gemayel was quoted as saying : “Hezbollah’s attack on the president is a defiance to all Lebanese and this will make us hold more onto legitimacy.”

The statement was issued following Hezbollah’s criticism of the president.

“The Phalange Party stands by the president and supports his national and courageous stances that aim to preserve Lebanon’s sovereignty and its independence.” The statement added

Hezbollah on Saturday slammed President Michel Suleiman over his recent comments during his speech at the University of Kaslik in which he insisted on making the Baabda Declaration the basis of the new cabinet’s policy statement and equated the (Baabda) Declaration to the National Pact.

“With all our due respect to the presidency and what it represents, the latest speech delivered Friday makes us believe that the Baabda Palace has recently been in need of special care, since its occupier cannot differentiate anymore between gold and wood,” the Hezbollah statement said.

This was in direct response to Suleiman’s advise against” clinging to wooden formulas that hinder the drafting of the ministerial statement.”

In a quick reaction via Twitter to Hezbollah’s attack, President Suleiman stated on Saturday that what Baabda Palace needs is acknowledging the unanimous consensus over the Baabda Declaration that was reached inside its premises.

Worthless with the resistance

Hezbollah’s number 2 Sheikh Naim Qassem said on Saturday that “Lebanon is worthless without the resistance.”

“Lebanon is worthless without its resistance. Even more, Lebanon does not exist without the resistance,” he added during a speech at a Hezbollah event.

“The resistance is a cornerstone of the ministerial policy statement and the draft will not be complete without mentioning it.” He stressed

One Lebanese analyst commented on Qassem’s statement by saying “Hezbollah which was created by the Iranian Revolutionary Guards in 1982 is only 32 years old , while Lebanon is thousands of years old ….. Qassem’s statement that Lebanon does not exist without the resistance is therefore all nonsense .”