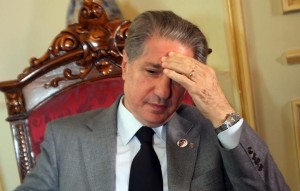 The Phalange Party’s media office said that quotes taken from party leader former Lebanese president Amine Gemayel’s Friday interview with an Iranian television station were not true in any way.

“The excerpts from Gemayel’s interview on the Iranian Al-Kawthar television station…are not true in any way,” read a statement issued Saturday by the Phalange Party’s media office.

“ His quotes were modified and distorted, which completely altered their original meaning.”

The statement went on to stress the Phalange party’s “position about Lebanon’s neutrality with regards to regional issues, notably the Syrian conflict.”

The Phalange media office called on all media agencies to “refer to the party’s sources to receive accurate news” on all matters related to the party.

An the interview with Al-Kawthar television station which was published on Saturday, Gemayel did not dismiss the possibility that he could run for president.

“The possibility of presenting my candidacy depends on the stage and the conditions that the country is passing through.”, Gemayel allegedly said on Friday.

Gemayel 72, was President of Lebanon from 1982 to 1988 . He was elected to the presidency by the Parliament on September 21, 1982, to replace his brother Bachir Gemayel who had been elected the previous month but had been assassinated before taking office. Syria was accused of being behind his assassination.