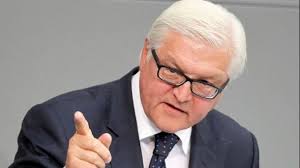 A day before German chancellor Angela Merkel and nearly her entire Cabinet arrive in Israel for a two-day visit, Frank-Walter Steinmeier published an op-ed in the Yediot Ahronot daily newspaper Sunday in which he vowed that Israel would not “stand alone.”

But tensions have arisen of late over Israel’s West Bank settlement policies.

In her weekly video message, Merkel made clear over the weekend that she will be pressing Prime Minister Benjamin Netanyahu on the peace talks. Her government has been outspoken in its criticism of the settlements.