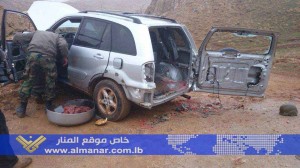 The Lebanese army announced on Sunday that it has intercepted a booby trapped car in the outskirts of the village of Ham in the eastern Bekaa region, and managed to diffuse it.

According to a communique by the army, “a Toyota Rav4 coming from the Syrian region of Qalamoun and heading to Beirut was intercepted 600 meters away from an army checkpoint on the Eastern Lebanon Mountain Range. Its driver fled the car when it was spotted.”

The army units “pursued the car and opened fire at it but the driver was able to flee,” the statement added.

A military expert examined the car and reported it had a big load of explosives. Another expert was summoned to dismantle the explosives.

Some reports said that explosives estimated at around 300 kg ( 660 lbs) were found in the car, in addition to a quantity of fuses, while Hezbollah’s al Manar reported that about 250 ( 550 lbs) kg of highly combustible explosives were found.

State Commissioner to the Military Court Judge Saqr Saqr ordered the army’s intelligence to transfer the car to its headquarters and launch preliminary investigations.

Last week, military experts defused a booby-trapped vehicle in Beirut’s Corniche al-Mazraa neighborhood after the army announced the arrest of a leader in the Qaida-linked Abdullah Azzam Brigades, it also intercepted another explosive-laden vehicle in the Bekaa region.

Lebanon has seen a string of deadly attacks, including car bombs, linked to Syria’s war, claimed by al-Qaida-linked groups.

Although officially neutral in Syria’s conflict, Lebanon is deeply divided over the Sunni-led rebellion against President Bashar Assad, whose troops are backed by fighters from Lebanon’s Iranian backed Hezbollah militant group.