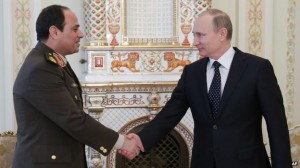 Russia’s President Vladimir Putin has said he backs Egypt’s military chief Abdul Fattah al-Sisi in his “bid for the presidency”.

Mr Putin, meeting Field Marshal Sisi in Moscow to discuss an arms deal, said he was “aware” of his decision to run.

However, there has been no announcement on the matter from the Egyptian side.

The field marshal led the overthrow of President Mohammed Morsi last July, and the new constitution calls for an election by mid-April.

Correspondents say Field Marshal Sisi would be likely to win, given his popularity and the lack of any serious rivals.

Mr Putin said: “I know that you, mister defence minister, have decided to run for president of Egypt.

“I wish you luck both from myself personally and from the Russian people.”

Field Marshal Sisi is in Russia to negotiate a $2bn arms deal, after the United States suspended some of its annual military assistance in response to Mr Morsi’s removal.

Field Marshal Sisi said: “Our visit offers a new start to the development of military and technological co-operation between Egypt and Russia. We hope to speed up this co-operation.”

No details have been released about the military discussions, although Russian media pointed to Egyptian interest in acquiring air defence missiles, MiG-29 jets and helicopters, among other weapons.

Two weeks ago Egypt’s Supreme Council of the Armed Forces (Scaf) gave its public support to any presidential bid by Field Marshal Sisi.

However, last week, the military issued a denial after a Kuwaiti newspaper quoted the field marshal as saying he would run for the presidency.

The military said at the time that any announcement would “be done via clear and direct statements that cannot be doubted or misinterpreted”.

The 59-year-old former military intelligence chief was appointed head of the armed forces and defence minister by Mr Morsi in August 2012.

But after mass protests demanding Mr Morsi’s resignation took place on the first anniversary of his taking office, it was the field marshal who gave the president an ultimatum that he would have to satisfy the public’s demands or see the army step in.

When Mr Morsi refused, Field Marshal Sisi suspended the constitution and announced the formation of an interim government.

Since then, more than 1,000 people have been killed and thousands of members of Mr Morsi’s Muslim Brotherhood have been detained in a crackdown by the interim authorities, who have designated the Islamist movement a terrorist group.

Mr Morsi and many other senior Brotherhood leaders are currently being tried on a variety of charges, including incitement to murder and conspiring to commit terrorist acts.