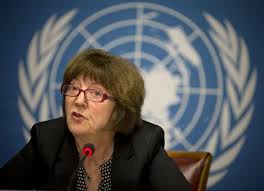 The report demanded that the Vatican immediately turn over to criminal investigators any known or suspected abusers and end its “code of silence” by enforcing rules ordering dioceses to report abuse to local authorities. It also called on the Vatican to open its archives on sexual allegations against clerics.

The range of the report appeared to infuriate the Vatican, which last month sent two top officials to appear before the U.N. panel in Geneva for the first public accounting of the Holy See’s handling of abuse allegations. Officials said they are still studying the findings, but responded angrily to what they described as recommendations that are ideologically biased. They said the United Nations has no right to weigh in on church teachings.

“Trying to ask the Holy See to change its teachings is not negotiable,” Silvano Maria Tomasi, the Vatican’s permanent observer at the United Nations in Geneva, told Vatican Radio. He suggested that gay rights groups had influenced the commission.

The Vatican has been riding a wave of positive publicity since Pope Francis was elected in March. But the report — which is not binding, meaning the United Nations has no way to enforce its recommendations — drew attention to the single largest stain on the Catholic Church’s global image: Its handling of allegations of sexual abuse by clerics.

The Vatican had been bracing for the report. After widespread revelations of sexual abuse by clerics in Europe in 2010, the U.N. committee, which is headquartered in Geneva, began an inquiry last year. The Vatican declined the panel’s request to review internal files and data on abuse cases.

The report said the church in some places has “systemically” adopted policies that put children at risk. In some cases, confidentiality has been imposed on child victims and their families as a condition of financial compensation. The panel also said Catholic officials obstructed efforts in certain countries to extend the statute of limitations for criminal or civil cases.

The committee “is gravely concerned that the Holy See has not acknowledged the extent of the crimes committed, has not taken the necessary measures to address cases of child sexual abuse and to protect children, and has adopted policies and practices which have led to the continuation of the abuse by and the impunity of the perpetrators,” the report concluded.

The panel condemned church doctrine that it considers out of step with the principles of human rights and child welfare. In blunt language, the committee took particular aim at church stances on sexual orientation, reproductive health and gender equality. It delved into details, expressing its concerns, for instance, about the stereotyping of gender roles in Catholic school textbooks.

Although some Catholic leaders deemed the report anti-Catholic, an expert on the United Nations said there generally isn’t tension between the organization and religion.

Wednesday’s critique of the Catholic Church around reproductive issues in particular recalled the clash of world views with the Holy See at the 1994 U.N. population conference in Cairo, where some participants called the Vatican to task for its stance against contraception. But some experts said it was rare for the United Nations to comment on religious doctrine.

The scope of the report illustrated the broad purview of the 10 U.N. committees that monitor adherence to human rights treaties. Their members have done everything from blast Japan for being “deaf” on women’s rights to pointing a finger at Canada for its treatment of the Inuit.

The report from the committee — made up of 18 experts including child welfare advocates and academics — called on the Vatican to adopt reforms and update the panel by 2017.

U.N. officials in Geneva described the investigation as only one of many periodic reviews it conducts of sovereign states that are signatories of Convention on the Rights of the Child, which the Holy See ratified in 1990. They said the panel’s report veered beyond the sexual abuse cases because it found the other topics relevant to the Vatican’s compliance with all articles of the convention. The United States is one of three U.N. member states that have not ratified it.

Officials dismissed suggestions from the Vatican that the report is biased.

“Discrimination on the basis of sexual orientation is something that we have raised with many states,” Kirsten Sandberg, chair of the committee, said in a statement. “This is nothing special. We are not going outside the scope of the Convention.”

For more than a decade, the church has been periodically rocked by widespread allegations of sexual abuse in the United States, Europe and beyond. The church response has varied by nation, and the report Wednesday does not address safety measures from country to country.

In some nations, victims have received bare-bones support even as civil legal systems have left oversight entirely to the church. The U.S. church, on the other hand, has made major institutional changes since the abuse crisis came to light in 2002, including requiring extensive background checks for church volunteers, screening of priests and a requirement that abuse must be reported to authorities.

Vatican defenders said the report did not consider the significant action the church has taken to combat sexual abuse in recent years. Independent studies show that complaints have decreased sharply over the decades, but reports continue to show that no top U.S. church officials have been held legally accountable. The first senior Catholic Church official was convicted in 2012 of covering up abuse, but his conviction was overturned in December.

Since becoming pope 11 months ago, Francis has said that addressing the child abuse allegations is important to restoring the church’s credibility. In December, the Vatican announced the creation of a commission on abuse cases that would inform the pope about the progress of investigations and come up with initiatives to combat the problem. Victims groups, which hailed the U.N. report, have said the new committee is too little, too late.

Vatican observers said the report will serve as a wake-up call to church authorities that despite the positive response to the new pontiff, the church still needs to do more to address abuse allegations. But delving into doctrine also appeared to push the focus on sex abuse off track.

Sister Mary Ann Walsh, spokeswoman for the U.S. Conference of Catholic Bishops, said “anyone bringing attention to the problem [of sex abuse] is moving toward solving it.” But she strongly criticized the United Nations for weaving issues such as contraception and abortion into the report.