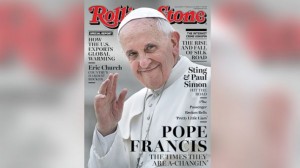 Never has a pope had so much in common with a rock star.

Pope Francis, who is known for his independent streak and for captivating crowds, has landed the February 2014 cover of Rolling Stone magazine.

“The times they are a-changin’ at the Vatican,” Rolling Stone declared in the headline, offering a look “inside the Pope’s gentle revolution.”

Since his election last March, Pope Francis, 77, has emerged as an endearing figure known for his humility and desire to build a more inclusive church.

Eager to focus less on divisive social issues such as abortion, Francis describes his church as “a field hospital after a battle” in which he must minister to everyone.

He’s also created some picture-perfect moments during his first year as pope, from donning a silly red clown nose to giving a little boy who wandered onstage during a homily a playful pat on the head.