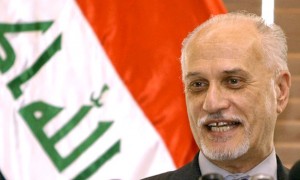 Iraq is poised to flood the oil market by tripling its capacity to pump crude by 2020 and is collaborating with Iran on strategy in a move that will challenge Saudi Arabia’s grip on the Organisation of Petroleum Exporting Countries.

Al Shahristani said on Tuesday that Iraq plans to boost its capacity to produce oil to 9m barrels a day (bpd) by the end of the decade as Baghdad rushes to bolster its economy, which is still shattered by war and internal conflict. Iraq was producing 3m bpd in December, according to the International Energy Agency.

Iraq’s intention to challenge Saudi Arabia’s status as the “swing producer” in the OPEC cartel could see a dramatic fall in oil prices if Baghdad decides to break the group’s quotas and sell more of its crude on the open market.

British oil giants BP and Royal Dutch Shell are also poised to benefit from Iraq’s ambitious production plans. Both companies are already managing two huge oil fields in southern Iraq which are vital if Baghdad is to achieve its goal.

However, even if Iraq is able to achieve its target of boost production capacity it is unlikely to be able to put in place sufficient pipeline and port infrastructure to export the additional crude.

Iraq’s main export terminal for loading oil tankers at Al Faw near Basra will require billions of pounds worth of improvements in addition to the refurbishment of its pipeline network.

Iraq’s ambitious plan could see it clash increasingly with the regime in Saudi Arabia, which has used its influence in OPEC over the last decade to keep oil prices above $100 a barrel. Saudi itself is now under pressure to boost output to maintain market share. The kingdom pumped 9.8m bpd in December up by about 100,000 barrels from the previous month.

Experts say that attention within OPEC, which pumps 30pc of the world’s crude, could increasingly focus on compliance with more of the group’s members tempted to pump more barrels to protect their share of the market as the cartel grapples with the rise of US shale oil production.

OPEC agreed in early December to renew for six months its 30m bpd output cap for the first half of the year to keep prices above $100. However, quotas have in the past proved difficult for OPEC as a group to enforce without any binding penalties for over-producing. Since its restoration to OPEC following the 2003 Gulf War, Iraq has been excluded from the group’s quota system to allow its economy to recover but pressure is mounting for it to comply this year.

The International Monetary Fund this week warned that Iraq’s weak economy remains vulnerable to fluctuations in oil markets. Crude oil exports account for 93pc of government revenues. The IMF estimated that Baghdad required an average oil price of $106.1 per barrel in 2013 to balance its budget, up from $95 in 2011 because of higher spending.

Despite Mr al-Shahristani’s hopes for boosting Iraq’s energy sector there are severe concerns over security amid fears the country may again be slipping toward a civil war between Sunni and Shia Muslim factions.

In a further challenge to Saudi Arabia, which is mostly closed to international oil companies, Mr al-Shahristani revealed that Baghdad is working with Iran to help it attract investment ahead of the possible lifting of sanctions. Oil companies are understood to be queuing up to win Iranian oil deals.

“Iran has been in touch with us,” said Mr al-Shahristani. “They want to share our contracts model and experience.”

Combined, Iran and Iraq hold greater reserves of oil than Saudi Arabia and the potential with the help of international investment to match its capacity to produce oil, which currently stands at around 12.5m b/d of crude.