Turkey’s central bank took a big step to boost its credibility and halt the collapse of its currency, but its super-sized interest-rate rise overnight can’t cure all of its stresses, nor those of its emerging-market peers, investors say.

Rate-setters blindsided markets after an emergency meeting on Tuesday that concluded at midnight, by delivering a much larger rate rise than economists had expected. Having resisted any rise in benchmark rates for months, for fear of crimping economic growth, the central bank more than doubled its benchmark one-week repo lending rate for banks to 10% from 4.5%.

The moves sent the lira soaring, with the dollar sinking almost 4% to under 2.17 in Asian trading hours. That marked a decline for the buck of over 9% so far this week. Other currencies from emerging markets, including those that share the lira’s strain of struggling to draw in foreign funds as the U.S. Federal Reserve trims its stimulus, also jumped. Stocks in Asia jumped, while the yen—a big winner in times of market stress—slumped. 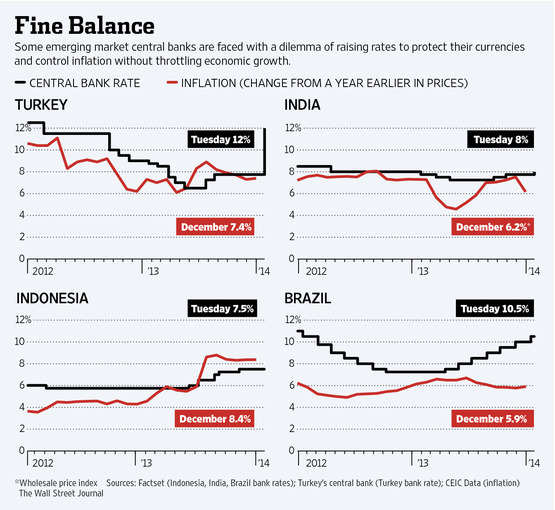 But none of these market shifts lasted long. As European trading progressed, the lira edged toward the levels it held before the decision, slightly above 2.24 against the dollar. Barely related currencies such as the Brazilian real, Mexican peso, Polish zloty and Hungarian forint also fell heavily, suggesting that traders and investors are seeking to avoid riskier bets in general. U.S. Treasury bonds—the ultimate safe-haven assets—rallied.

Even though the lira lost ground during Wednesday’s trading session, the currency is still substantially higher than it was earlier this week, when the dollar neared 2.39 against the lira.

For investors, the swings underline that while this bump-up in Turkish rates is a tonic for Turkey, it is no repeat of European Central Bank President Mario Draghi’s “whatever it takes” to save the euro statement in the summer of 2012 that proved to be a lasting game-changer for risky bets across the board.

“This is definitely not a Draghi moment that changes everything. It’s not 100% clear that this will work; stresses in Turkey are driven by fundamental factors. It takes Turkey in the right direction, but this could be grotesquely painful for the domestic economy. The chance of a run on Turkey is significantly lower, but it is still possible,” said Paul McNamara, an emerging-markets debt portfolio manager at GAM in London, who manages $6 billion of assets.

Mr. McNamara said that in response to the Turkish rates decision, he has upped his allocation to Turkish government bonds somewhat, but he still holds a small position compared with his benchmarks, and he doesn’t consider now to be the time to put a larger share of his portfolio into Turkey than his benchmarks would suggest.

“The reality is that Turkey needs capital flows every day. The rate hike makes more difficult for people to [sell] the lira, but this doesn’t mean necessarily people are coming in,” said Francesc Balcells, an emerging-market portfolio manager with Pacific Investment Management Co., which manages a total of $1.97 trillion.

“Let’s face it, the external environment is not generous with heavy borrowers with large current-account deficits. The Turkish central bank did the right thing but ultimately this was necessary but not sufficient,” Mr. Balcells added.

Mr. Erdogan’s government has repeatedly warned that any interest-rate increase could choke growth, which slowed sharply to 2.2% in 2012 from 8.9% the previous year. On Tuesday, the premier also attacked foreign media organizations, among them The Wall Street Journal, and some of Turkey’s biggest businesses, saying “they have pocketed the resource and energy of this country.”

Turkey isn’t alone in struggling to keep foreign cash flowing in while treading that tightrope. India, which has similar pressures, also raised interest rates unexpectedly earlier this week, with a more modest rise of 0.25 percentage point.

Analysts agree that this double whammy will increase the pressure on other central banks in emerging markets with worsening balances of payments to take similar steps. Among that list, South Africa’s central bank is due to announce its rates stance later on Tuesday. It, however, is expected to hold rates steady at 5%.

Its go-it-alone stance has left the rand vulnerable; on Wednesday, the rand not only wiped out its overnight gains, but sank further still, nearing a new post-2008 low with the dollar stepping just shy of 11.20 to the rand.