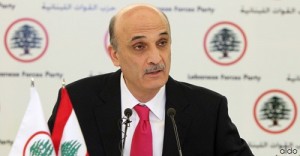 “ Suleiman and Salam should not waste any more time and they should use their constitutional powers to form a cabinet that is independent from the March 8 and the March 14 coalitions, but not detached from the policy of sovereignty represented in the Baabda Declaration,” Geagea told Al-Markazia news agency on Tuesday.

Geagea also stressed the need to form an effective cabinet that would not be deadlocked in its decisions by political differences among its ministers.

“The deteriorating and chaotic situation leaves the country in desperate need for a cabinet; not any cabinet, but an effective and real cabinet,” Geagea said.

“For the first time, experience is showing that the formation of the so-called all-embracing government is facing mountain size obstacles ,” he said.

Such obstacles are linked to “narrow interests,” the LF chief said about his Christian rival Free Patriotic Movement leader Michel Aoun, who has rejected the all-embracing cabinet based on the 8-8-8 formula and the rotation of portfolios among sects.

“A neutral government is the only one … that leads to an acceptable level of stability in the country and distances itself from the logic of division of shares,” Geagea stressed.

Geagea’s comments come after the Free Patriotic Movement leader rejected the proposed rotation of the ministerial portfolios, and after his son-in-law caretaker Energy Minister Gebran Bassil voiced his insistence on holding onto the Energy Ministry.