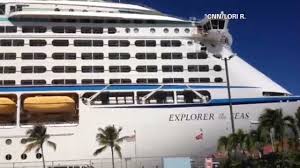 According to Bernadette Burden, a spokeswoman with the Centers for Disease Control and Prevention, more than 600 people on the ship have become ill. Passengers and crew members reported vomiting and diarrhea.

“New reports of illness have decreased day-over-day, and many guests are again up and about. Nevertheless, the disruptions caused by the early wave of illness means that we were unable to deliver the vacation our guests were expecting,” the cruise line said in a statement.

“After consultation between our medical team and representatives of the U.S. Centers for Disease Control and Prevention, we think the right thing to do is to bring our guests home early, and use the extra time to sanitize the ship even more thoroughly,” the company said.

Explorer of the Seas left January 21 from Cape Liberty, New Jersey, and it has been in the Caribbean.

After returning to its home port on Wednesday, the cruise line said it would perform a “thorough ‘barrier’ sanitization program on the entire ship to make certain that any remaining traces of the illness are eliminated.”

The cause of the illness was not immediately clear, though symptoms are consistent with norovirus, the cruise line said.

Noroviruses spread easily and are a common cause of gastroenteritis, which produces vomiting and diarrhea.

Joseph Angelillo was one such person. He said he thought, at first, he just had food poisoning.

“I started with upset stomach and vomiting, and that lasted all night and into the morning,” he told CNN by phone Sunday.

He said some entertainers were sick and shows had to be canceled.