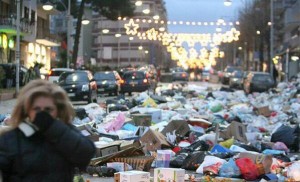 Sukleen is the only waste management firm in charge of collecting garbage in Beirut and Mount Lebanon, except Jbeil, for a total of 364 towns and municipalities. The total waste collected by the company rose from 1,140 tons daily in 1994, to 3,100 tons today.

Hundreds of municipalities were left to drown in their garbage.Protesters at the gates of the Naameh landfill are preventing Sukleen trucks from reaching the landfill and this has resulted in drowning the capital Beirut and Mount Lebanon in waste. The campaign to close the Naameh landfill is demanding an immediate alternative and abiding by the text of the landfill contract, which stipulates that waste should be buried and limits the types of waste allowed, in addition to restriction on quantities.

A clash erupted on Friday between Internal Security Forces deployed on the road leading to the Naameh landfill and protesters who tried to prevent Sukleen waste trucks from entering the area.

Protesters lashed out in a statement at Interior Minister Marwan Charbel for allowing police members to storm into the protest camp at dawn and forced “peaceful protesters” out of their tents.

A statement read by one of the activists vowed to go on with their open-ended strike until the landfill is shut.

Earlier on Friday, ISF removed the protest camp near the Naameh landfill and opened the road for Sukleen trucks to enter after vows to close the landfill by the end of 2015.

Activist Ragheda al-Halabi, the protesters spokeswoman, told Voice of Lebanon radio (93.3) that around 300 police members removed the erected tents near the Naameh landfill.

NNA reported that Ajwad al-Ayyach, the spokesman of “Campaign to Close the Naameh Landfill,” was detained over charges of provoking protesters.

The blockade of the road leading to Naameh landfill by protesters kicked off last Saturday after activists and residents in the nearby areas complained of what they described as bad living conditions.

On Thursday, the protesters issued a statement giving the state until January 17, 2015 to close the landfill, stressing that their open-ended sit-in will go on until their demands are achieved.

After six years, a new landfill was to be established somewhere else. That date has long come and gone, and yet the landfill still grows.

“This is a crisis,” Charbel Matar, deputy mayor of Naameh was quoted as saying last July. “The government is not looking, or rather, can’t find another area for the landfill.”

The landfill was designed to hold up to 3 million tons of refuse, but by its fourth year, it reached capacity. It also wasn’t to exceed a height of 20 meters, according to Sukleen, another limit it has managed to surpass.

The government was set to begin working on another landfill in the southern region of Iqlim al-Kharroub a few years ago, but the project was discontinued when residents took to the streets and staged angry protests.

General Electric was reportedly set to roll out its first landfill gas-to-energy project in Naameh, over a year ago but there has been no date set for the project and the people of Naameh know nothing about it,

“The mistake that was made here, whether by the government or by the town, was that a project seeking to convert methane gas into electricity wasn’t discussed at all.” Matar was quoted as saying last year.

One observer told Ya Libnan in reaction to the garbage situation. “But the whole country is in a mess with no government in sight . Power blackouts continue on a daily basis. Bombings too are almost a daily affair as a spillover of the Syrian civil war. The economy is in a mess, unemployment is at all time high and no jobs are to be found . The best solution will be to dump all the Lebanese politicians in the Naameh landfill and start anew . With all the politicians in the ground we may end up with more gas for electricity than we ever dreamed about. “