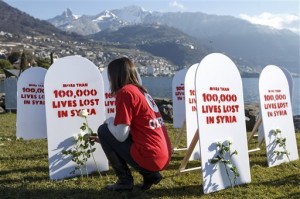 Peace talks to carve a path out of Syria’s civil war got off to a rocky start Wednesday as a bitter clash over President Bashar Assad’s future threatened to collapse the negotiations even before they had begun.

The dispute over Assad cast a pall over an international conference that aims to map out a transitional government and ultimately a democratic election for the country mired in fighting that has killed more than 130,000 people and displaced millions.

While diplomats sparred against a pristine Alpine backdrop, Syrian forces and opposition fighters clashed across a wide area from Aleppo and Idlib in the north to Daraa in the south, activists and state media said.

The two sides seemed impossibly far apart just hours into the talks in the Swiss city of Montreux. Complicating matters, both Assad’s delegates and the Western-backed opposition Syrian National Coalition claimed to speak for the Syrian people.

“We did not expect instant breakthroughs. … No one underestimated the difficulties,” U.N. Secretary-General Bank Ki-moon told reporters at the end of the day. “The Syrian people are looking desperately for relief from the nightmare in which they are trapped.”

A U.N. mediator will meet separately with both Syrian sides on Thursday to see if they can even sit together in face-to-face talks due to begin Friday. The mediator, Lakhdar Brahimi, said both sides had shown some willingness to bend on humanitarian access and local cease-fires, and he hoped to build on that common ground.

The U.S. and the Syrian opposition opened the conference by saying that Assad lost his legitimacy when he crushed the once-peaceful protest movement against his regime.

“We really need to deal with reality,” said U.S. Secretary of State John Kerry. “There is no way – no way possible in the imagination – that the man who has led the brutal response to his own people could regain the legitimacy to govern. One man and those who have supported him can no longer hold an entire nation and a region hostage.”

The Syrian response was firm and blunt.

“There will be no transfer of power and President Bashar Assad is staying,” Syrian Information Minister Omran al-Zoubi told reporters.

Syrian Foreign Minister Walid al-Moallem, who refused to give up the podium despite numerous requests from the U.N. chief, declared that terrorists and foreign meddling had ripped his country apart.

“You live in New York. I live in Syria,” he angrily told Ban. “I have the right to give the Syrian version here in this forum. After three years of suffering, this is my right.”

Ahmad al-Jarba of the Syrian National Coalition had wavered up to the last minute on whether to attend the peace talks that have been largely opposed by rebel brigades in Syria.

He said any discussion of Assad’s continued hold on power would effectively end the talks. A transitional government “is the only topic for us,” he said.

But al-Moallem insisted that no one except Syrians could remove Assad. He also accused the West and neighboring countries — notably Saudi Arabia, which he did not name — of funneling money, weapons and foreign fighters to the rebellion.

“The West claims to fight terrorism publically while they feed it secretly,” he said. “Syrians here in this hall participated in all that has happened, they implemented, facilitated the bloodshed and all at the expense of the Syrian people they claim to represent.”

He also criticized the opposition coalition, which is based in Turkey and is largely made up of exiles with little sway on events inside Syria.

At least 130,000 people have been killing in the fighting that began with a peaceful uprising against Assad’s rule in March 2011, according to activists, who are the only ones still keeping count after the U.N. abandoned its efforts. The fighting in Syria has become a proxy war between regional powers Iran and Saudi Arabia, and taken on post-Cold War overtones with Russia and the United States backing opposite sides.

The question of Assad’s future goes to the heart of the peace conference with the stated goal of a transitional government for Syria. Notably absent was Iran, which along with Russia has been Assad’s most forceful supporter.

Ban invited, then disinvited Iran at the last minute, after the Syrian opposition threatened to back out of the peace talks less than 48 hours before their start.

Saudi Foreign Minister Saud al-Faisal, whose government has funneled millions to the rebels, said “it goes without saying that Assad has no role in Syria’s future.” He also called on foreign forces to withdraw from Syria, including the Iranian Revolutionary Guards and Hezbollah militias.

Syrian state television aired al-Moallem’s speech in full, but then cut away to archive footage of car bombs and sectarian attacks during speeches by opposition leader al-Jarba and the Turkish foreign minister.

Diplomats have played down expectations for the Swiss peace talks, although they have said repeatedly they are the only hope for ending Syria’s civil war. But Assad’s forces have gained ground in recent months, and the man whose family has led Syria since 1970 has tried to portray the rebellion as one driven by foreign terrorists who are trying to create an al-Qaida-inspired haven.

The president of Iran, which has given Assad billions in aid, including weapons and Shiite fighters, said the talks were likely to fail.

After the bitter speeches, the diplomats settled in for an afternoon of bilateral meetings. Those included the second in less than 24 hours between Kerry and his Russian counterpart, Sergey Lavrov, who together had hammered out the landmark agreement last fall that saw Assad give up Syria’s chemical weapons program.

“The talks between Syrian parties aren’t going to be simple and quick,” Lavrov said in his address. “The conference is not 100 percent certain, but still a real chance to achieve peace.”

At the end of a tense day in a peaceful setting, Ban said even getting the two sides in the same room was something of a success.

“This meeting was conducted in a harmonious and constructive way,” he said.