Assad is the problem at Syria peace talks, report 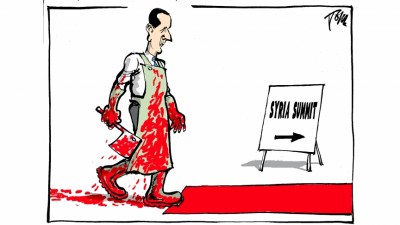 Opposition leader Ahmed Jarba accused the president of Nazi-style war crimes and demanded the Syrian government delegation at the one-day meeting in Montreux, Switzerland sign up to an international plan for handing over power.

Syrian Foreign Minister Walid al-Moualem insisted Assad would not bow to outside demands and painted a graphic picture of “terrorist” rebel atrocities supported by Arab and Western states who back the opposition and were present in the room.

The United States and Russia, co-sponsors of the conference which UN officials hope will lead to negotiations in Geneva from Friday, also revealed their differences over Assad during a day of formal presentations in Montreux on Lake Geneva.

The talks reflect mounting global concern that a war which has killed over 130,000 and left millions homeless is spilling beyond Syria and fuelling sectarian militancy abroad. But there was little sign that any party was ready to make concessions.

Western officials said they were taken aback by the combative tone adopted by Moualem, who also defied United Nations Secretary General Ban Ki-moon’s plea to shorten his speech. Some diplomats questioned whether negotiations could continue.

US Secretary of State John Kerry echoed the rebel view that there is “no way” Assad can stay under the terms of a 2012 international accord urging an interim coalition. But Russian Foreign Minister Sergei Lavrov said all sides had a role and condemned “one-sided interpretations” of the 2012 pact.

Saudi Arabia, which backs the Sunni rebels, called for Iran and its Shi’ite Lebanese ally Hezbollah to withdraw forces from Syria. Iran, locked in a sectarian confrontation across the region, was absent, shunned by the opposition and the West for rejecting calls for a transitional government. Its president said Tehran’s exclusion meant talks were unlikely to succeed.

The conference has raised no great expectations, particularly among Islamist rebels who have branded Western-backed opposition leaders as traitors for even taking part.

But even Western officials said hopes of talks in Geneva on Friday and beyond may be in jeopardy: “It’s very far from encouraging,” said a French diplomatic source. “We have the impression the regime has come to Geneva to ensure it fails.”

German Foreign Minister Frank-Walter Steinmeier called Moualem’s rejection of any government responsibility for the crisis “astounding and infuriating”. Progress with Damascus was at risk, he said, “if they don’t show some intelligence”.

“After nearly three painful years of conflict and suffering in Syria, today is a day of fragile but real hope,” Ban said, condemning human rights abuses across the board. “Great challenges lie ahead but they are not insurmountable.”

But there was little sign of compromise on the central issue of whether Assad, who inherited power from his father 14 years ago, should make way for a government of national unity.

He himself says he could win re-election later this year and his fate has divided Moscow and Washington. Both endorse the conclusions of the 2012 meeting of world powers, known as Geneva 1, but differ on whether it means Assad must go now.

Opposition leader Jarba called for the government delegates to turn against their president before so-called Geneva 2 negotiations start: “We want to make sure we have a partner in this room that goes from being a Bashar al-Assad delegation to a free delegation so that all executive powers are transferred from Bashar al-Assad,” the National Coalition leader added.

“My question is clear. Do we have such a partner?”

Turning around the government’s accusations that the rebels have fostered al Qaeda and other militants, Jarba said it was Assad’s forces which, by targeting mainstream opposition groups, had created the conditions for al Qaeda to thrive.

Moualem called on foreign powers to stop “supporting terrorism” and to lift sanctions against Damascus.

Referring to rebel atrocities, he said: “In Syria, the wombs of pregnant women are cut open, the foetuses are killed. Women are raped, dead or alive … Men are slaughtered in front of their children in the name of the revolution.”

He insisted Assad’s future was not in question, saying: “Nobody in this world has a right to withdraw legitimacy from a president or government … other than the Syrians themselves.”

Lavrov repeated Moscow’s opposition to “outside players” interfering in Syria’s sovereign affairs and prejudging the outcome of talks on forming an interim government. He also said Iran – Assad’s main foreign backer – should have a say.

The Kremlin is wary of what it sees as a Western appetite for toppling foreign autocrats that was whetted in Libya in 2011. Moscow opposes making Assad’s departure a condition for peace. Speaking of the Geneva Communique, Lavrov said: “The essence of this document is that mutual agreement between the government and opposition should decide the future of Syria.”

Kerry also spoke of “mutual” agreement among Syrians, but in a sense that excluded Assad.

“We see only one option – negotiating a transition government born by mutual consent,” he said. “That means that Bashar al-Assad will not be part of that transition government. There is no way … that a man who has led a brutal response to his own people can regain legitimacy to govern.”

Despite the differences, however, some participants believe common interests in reining in violence could rally the West, Russia and possibly even Iran behind some form of compromise.

Norwegian Foreign Minister Borge Brende said he was “moderately optimistic” there would be further talks in Geneva on Friday: “Today was the day for making speeches,” he said.

“What I feel is that there’s a certain positive dynamic between Russia and the United States on Syria.”

A last-minute invitation from Ban to Iran was revoked after the Syrian opposition threatened to boycott the talks – a move that threatened to undermine months of US and Western efforts to cajole Jarba’s National Coalition into taking part.

President Hassan Rouhani said from Tehran that Iran’s exclusion made it unlikely the conference could succeed.

STARVATION
Qatar, which has armed Syria’s rebels, hit back at Moualem’s charge that Sunni Gulf Arab states had “exported to us monsters in human form who have drunk of the abhorrent Wahhabi ideology” – the Saudi school of Sunni Islam.

Praising high living standards in the Gulf, Qatari Foreign Minister Khaled al-Attiyah told delegates: “The Wahhabis did not starve people, who are forced to eat dogs and cats.”

During the speeches in Montreux, the war went on in Syria.

The Syrian Observatory for Human Rights monitoring group reported clashes and air strikes around the country. Around Damascus, government artillery hit villages and rebels clashed with the army in the neighbourhood of Jobar on the northeast fringe of the capital, it said. Activists also reported clashes in Hama, Aleppo and the southern province of Deraa.

The release of photographs apparently showing prisoners tortured and killed by the government was cited by Jarba and Western ministers. The Syrian government rejected the report as not objective and aimed at undermining negotiations.

Discontent stretches back to the rule since 1970 of Assad’s father, who took power in a military coup, but it boiled over in March 2011 as Syria’s drought-hit economy struggled and the Arab Spring uprisings in Tunisia and Egypt inspired protests.

When those were crushed, the revolt became a war that has taken on an increasingly sectarian complexion, setting majority Sunnis against Assad’s Alawite community, an offshoot of Shi’ite Islam. It has also drawn in rival powers with Saudi Arabia and Qatar backing the rebels and Iran standing by Assad.

Al Qaeda-linked militants and other Islamists have emerged as the most powerful forces on the rebel side, dampening Western appetite for direct intervention and sparking conflict among rival rebel formations. Iran and Hezbollah have helped Assad. And violence has spread, notably to Iraq and Lebanon.

In Damascus, where life limps on amid bombardments and checkpoints, weary residents voice cautious hopes for better.

“I can’t say there’s optimism anywhere pertaining to the Geneva talks, but it’s a start,” said Ruba, a mother of two. “I really don’t think much will come out of it, but the alternative is no talks at all, and that’s not much better.”

An opposition activist who uses the name Susan Ahmed said: “People are hopeful Geneva might be an omen for them to return to their homes. They’re exhausted and they want it all to end.”