Syrian talks in disarray before they begin 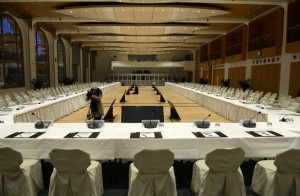 Beirut – Syrian and international delegates arrived in Switzerland on Tuesday for peace talks that few believe can succeed as the three-year-old civil war and geopolitical acrimony it has brought show no sign of abating.

Opponents of President Bashar al-Assad, pressured to attend Wednesday’s first direct negotiations by their Western backers, cited new, photographic evidence of widespread torture and killing by the Syrian government in renewing their demand that Assad must quit and face an international war crimes trial.

War crimes lawyers said a vast, smuggled cache of images from a Syrian military police photographer gave clear evidence of systematic abuse and murder of about 11,000 detainees. One of three former international war crimes prosecutors who signed the report compared the images from Syria with the “industrial-scale killing” of Nazi death camps.

The delegation from Damascus, led by Assad’s foreign minister, was briefly held up in Athens due to an argument over whether EU trade sanctions permitted refueling of the plane.

Assad has insisted he may be re-elected later this year and says the “Geneva 2” talks should focus on fighting “terrorism” – his term for his enemies.

But the opposition dismissed this suggestion. “Bashar al-Assad is free to say what he thinks but everyone knows that the objective of Geneva 2 is a full political transition with a new leadership that has no room for those with blood on their hands,” opposition delegation member Hadi al-Bahra told Reuters.

The United Nations, along with co-sponsors Russia and the United States, may at least be relieved if and when the two sides sit down at the Montreux Palace hotel on Lake Geneva. Diplomatic chaos on Monday had threatened to scupper the event, after U.N. Secretary-General Ban Ki-moon gave a last-minute invitation to Iran, Assad’s main foreign supporter.

The invitation was withdrawn after a boycott threat from the opposition, Western pressure and Iran’s insistence it had never agreed to the condition Ban set for attendance – that it endorse a previous peace conference, at Geneva in 2012, which called for Assad to make way for a transitional administration.

Narrowing the gap between the warring parties seems a tall order and diplomats at the United Nations stress the meeting at Montreux on Wednesday, to be followed possibly by further talks in Geneva from Friday, is only a beginning. It could produce some deals to ease civilian suffering and exchange prisoners.

Not only are both sides still committed to a fight on the frontlines, where victory continues to elude either party, but most of the myriad rebel groups have disowned the National Coalition opposition group for agreeing to talk at all.

U.N. mediator Lakhdar Brahimi notionally has the consensus support of world powers, but the uproar over the invitation to Tehran illustrated how the war has divided Western governments from Russia and set the Sunni Arab states which back the rebels against Shi’ite Iran.

Russian President Vladimir Putin and U.S. President Barack Obama had a “businesslike and constructive” conversation about Syria by telephone, the Kremlin said. Their foreign ministers, Sergei Lavrov and John Kerry, were to meet later in Montreux.

The spread of violence, which has already killed more than 130,000 and driven a third of Syria’s 22 million people from their homes, has, however, given a new, common impetus to international efforts to end the bloodshed.

In Beirut on Tuesday, a suicide bomber killed four people in a stronghold of Hezbollah, the Iranian-backed Lebanese Shi’ite militia. It has sent fighters to help Assad, a member of Syria’s Alawite minority, an offshoot of Shi’ite Islam.

At a refugee camp in Lebanon, a Syrian named Abu Shadi appealed to the conference delegates. “Find us a solution so that we can go back home. We’re really tired of this,” he said.

It has been 18 months since the previous international peace conference, called Geneva 1, ended in failure, and all other diplomatic initiatives have also proven fruitless.

“At best, Geneva 2 will reconfirm agreements made during the first Geneva conference, call for ceasefires, maybe prisoner swaps and so on,” said one Western diplomat.

“At the same time, those taking part in the talks are de facto giving legitimization to Damascus. They are talking to Assad’s government on the other side of the table.

“And so the show would go on while Assad stays in power.”

The talks could increase the ferocious internal strife among rival opposition factions, however. The conference is being boycotted by the powerful Sunni Islamist factions that control substantial territory inside Syria. They have denounced the exiled political opposition as traitors for attending.

The main ethnic Kurdish faction, which controls a swathe of the northwest, has not been invited. Nevertheless, Kurds declared a provincial government in northern Syria on Tuesday, consolidating their geographic and political presence before the talks.

The U.N. secretary-general arrived in Geneva, having nearly torpedoed the talks with his invitation to Iran. Aides shielded him from reporters’ questions about the affair.

Western countries have long insisted Tehran sign up to the final statement from Geneva 1 before it could attend other talks. Ban said Iran’s foreign minister had told him Tehran accepted the 2012 statement, which includes a requirement that Syria set up a transitional government. Tehran said it had agreed to no such thing.

A Western diplomat described the day as “a real mess” and said Ban had made a gaffe that had almost led to the conference being cancelled and replaced by a bilateral meeting between Russia and the United States.

The consequences of the war were illustrated in photographs of the emaciated and abused bodies of detainees, released in a report commissioned by a London law firm hired by Qatar, an avowed enemy of Assad. Its timing ensured the issue dominated international headlines before the talks began.

The report, by the three senior lawyers who have worked for international war crimes tribunals and three forensic experts, said they believed the pictures and the photographer’s account were

credible evidence that Assad’s government had systematically tortured and killed as many as 11,000 detainees.

They said they had been shown 55,000 images, most of which were provided by a source who identified himself as a Syrian police photographer whose job included documenting deaths in Assad’s jails on behalf of the authorities.

“The bodies … showed signs of starvation, brutal beatings, strangulation and other forms of torture and killing,” they wrote. “In some cases the bodies had no eyes.”

One of the report’s authors, Desmond de Silva, former chief prosecutor of a war crimes tribunal for Sierra Leone and one of Britain’s top lawyers, said the evidence documented “industrial-scale killing” reminiscent of Nazi death camps and was “clearly” the work of the government.

“Some of the images we saw were absolutely reminiscent of pictures of people who came out of Belsen and Auschwitz,” said de Silva, who also noted that Assad’s enemies were accused of some crimes. He added that the 11,000 dead were from only one area, saying: “It is the tip of the iceberg.”